Drawing on a sample of 246 agents and 111 language schools across five regions taken in July, the Association of Language Travel Organisations survey revealed that as a combined group average, both agents and schools had been expecting just 16% of their 2019 bookings over summer 2020.

“The traditional model of our business may never be the same, but a change was overdue”

“Globally, agents were more optimistic than schools,” explained ALTO, “anticipating between 7% and 15% higher booking across all periods and levelling out to a similar prediction of about 60% at the end of 2021”.

ALTO highlighted that of the regions, “LATAM is the most optimistic, followed by Brazil, with Asia predicting the lowest percentage return of business”.

International agencies consistently predicted higher percentages of bookings than most regions and represent the most optimistic group for January to August 2021, then levelling out to the average prediction of a 67% return to 2019 levels.

Respondents to the survey also commented that mitigating health and economic concerns associated with travel would be key to building parent and student confidence in the industry.

“Globally, agents and schools agree on the ranking of the priority expectations,” explained ALTO.

“Government policy of the host country leads in all regions, with the next priority being air travel cost and availability, and safety at airports.”

When broken down regionally, Asia and Turkey put a higher priority on the access to quality medical care in the host country and appropriate insurance coverage for arriving students, while Asia and LATAM prioritised school policies and protocols regarding Covid-19 in the host country.

For Europe and Russia, “travel policies and safety is now priority number one for parents, however, course fees may also affect the demand if costs are raised much comparing to 2019-2020”.

Canada, New Zealand and Australia were consistently in the top three globally, in Asia and with international schools.

Both Brazil and LATM prioritised Canada, New Zealand and Australia with the UK and Ireland in 4th and 5th position respectively. 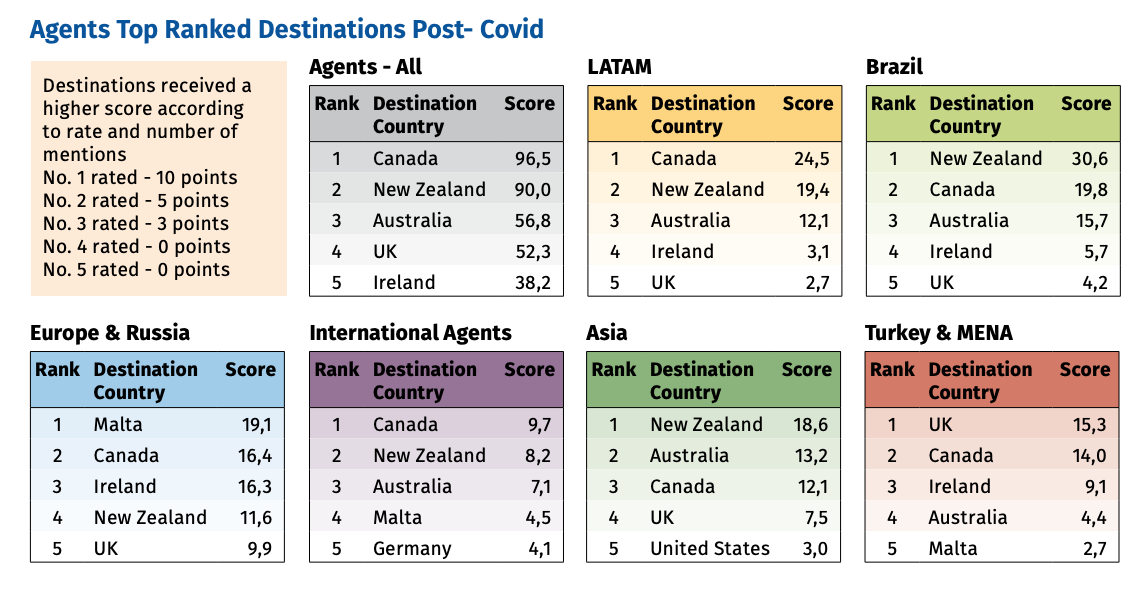 In order to identify areas where agencies and schools could revisit current policy and strategy, ALTO asked respondents to share their opinion on questions that commonly divide schools and agents and which have long been debated in the industry.

The main areas of disagreement were whether schools should incorporate source country legislation and whether agents should focus on sales and schools on delivery, not sales, with schools disagreeing and agents agreeing.

“Across the board, it was recognised that this extended period of disruption presents us with an extraordinary opportunity to assess and adjust our practices,” concluded ALTO.

“Efforts can be made to mitigate those concerns”

“The traditional model of our business may never be the same, but a change was overdue.”

ALTO explained that the results show the key concerns of students – affordability, government response and policy, quarantine restrictions, the safety of travel, and medical care in host countries.

“As an industry, some of these factors are outside of our control, however, efforts can be made to mitigate those concerns.

“There are also core areas of the industry where we can improve,” it added.