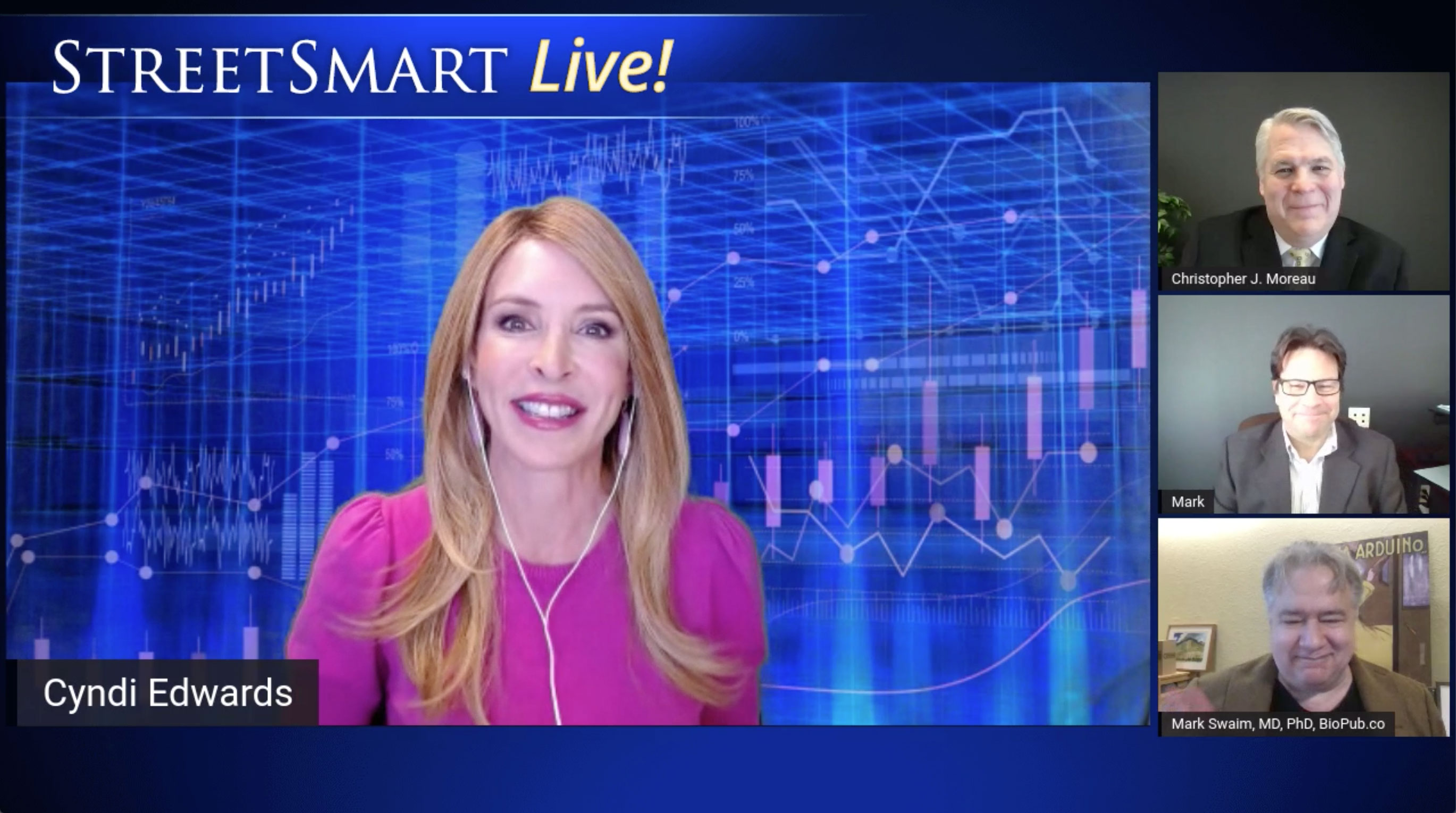 February 2, 2021 (Investorideas.com Newswire) Algernon Pharmaceuticals, a clinical stage pharmaceutical development company, announced that it has established a clinical research program for the treatment of stroke focused on AP-188 (DMT), a known psychedelic compound. Algernon plans to be the first company globally to pursue DMT for stroke in humans and is planning to begin a clinical trial as soon as possible in 2021.

In a StreetSmart Live! Broadcast on Feb. 1, 2021, Algernon Pharmaceuticals Inc. CEO Christopher Moreau and Chief Medical Officer Dr. Mark Williams discussed the company’s newest clinical program, an investigation into the use of the psychedelic drug dimethyltryptamine (DMT) that is part of the tryptamine family in stroke patients. Dr. Mark Swaim, founder and editor of BioPub.co, offered his thoughts about the company and its program.

The broadcast began with an introduction of Algernon Pharmaceuticals Inc. (AGN:CSE; AGNPF:OTCQB; AGW:FSE) as a drug repurposing company, currently with two clinical stage programs underway, one in COVID-19, the other in chronic cough and idiopathic pulmonary fibrosis.

Subsequently, the three guests fielded questions about DMT, what it is, what its potential benefits are, how it might be used and what Algernon’s clinical timeline for it is.

Moreau explained that dimethyltryptamine (DMT) is a psychedelic that occurs naturally in plants, leaves the body in under 15 minutes and does cause hallucinogenic effects. Algernon’s approach to the compound is one of clinical drug development, moving it through research and, hopefully, approval.

Dr. Williams noted that existing data on DMT indicate that at doses lower than what cause hallucinogenic effects, it causes neuroplasticity and neurogenesis. A study in which animals were exposed to DMT yielded “strong recovery rates, reducing infarct volume and almost complete restoring mobility in the limb,” he said. In patients who have suffered a stroke, whether a thrombolytic or hemorrhagic one, brain rewiring must occur due to the damage, and DMT just might help that happen in humans as well.

Dr. Swaim corroborated this, saying that evidence, albeit not comprehensive, exists that shows DMT can help brain cells heal.

Algernon intends to assess the administration of DMT at two potentially significant times, en route to the hospital after a stroke and in the rehabilitation phase. Assuming positive results in the latter case, DMT could possibly be used beyond stroke, for instance in multiple sclerosis, Parkinson’s disease and traumatic brain injury, to name a few.

“If you able to induce this rewiring and neuroplasticity effect, it may have broader applications. We don’t know yet,” Dr. Williams said. “It’s a very exciting frontier to be in. It could change the landscape for lots of patients for lots of diseases.”

Along with timing of administration, other factors that need to be hammered out are the exact subhallucinogenic yet effective dose and length of exposure during administration, which would be intravenously.

The company also is working to secure a steady, stable supply of synthesized DMT, made in accordance with current good manufacturing practice regulations.

Whereas some jurisdictions, such as China, do not allow DMT, others do, including the U.S., Canada, Australia and some European countries.

Algernon aims to commence human testing with a Phase 1 clinical trial by year-end 2021 and then conduct a Phase 2 next year. The entire process, through approval, Moreau said, will take about four to five years, and that is because DMT is an existing drug being repurposed. In comparison, a brand new drug would require about 12 to 13 years.

“If we can bring a new agent to clinic to induce neuroplasticity to regenerate the brain, we’re doing a great thing, and it’s a needed thing,” said Dr. Swaim. He added that the current standard of care for stroke is “appalling.”

When Moreau was asked if adding DMT to the pipeline in any way meant that the company was feeling negative about its COVID-19 trial data, he said, “We are not pivoting, we are just adding. Our data for the COVID trial is coming up at the end of February, but we have the capacity, we have the skill sets, the knowledge, we have the relationships to move additional drugs.”

“Our business model is to advance drugs, repurpose them and move them into clinical trials,” he said. “Our view is to have as many compounds in clinical trials as possible.”

He went on to say that the company has the knowledge and expertise to move its DMT program forward efficiently and cost effectively.

Dr. Swaim indicated that as one of five companies trying to position themselves in the stroke care and recovery space, “Algernon has catapulted itself to the top of that pack. By comparison, yes, [DMT] is that promising.”

The company has already garnered the interest and support of some “heavy hitters,” Moreau indicated. They include Dr. Rick Strassman, the author of book, DMT: The Spirit Molecule, who, in the 1990s, convinced the U.S. Food and Drug Administration to allow testing of DMT. Two others areDr. Ajo Joy, a leading stroke specialist in the U.S. and Dr. David Nutts, a physician in the United Kingdom with extensive experience in psychedelics.

Dr. Swaim offered his final thoughts on DMT, “I’m excited, there is so much we don’t know about plasticity… It’s a brilliant idea. It needs to be taken very seriously by investors in a positive way because it’s a clever, strategic move by the company, not only to get it on the investing tide into the psychedelic space but also to raise the bar of care in stroke because, believe me, it couldn’t be much lower than it is right now.”

2) The following companies mentioned in this article are billboard sponsors of Streetwise Reports: Algernon Pharmaceuticals. Click here for important disclosures about sponsor fees.

3) Comments and opinions expressed are those of the specific experts and not of Streetwise Reports or its officers. The information provided above is for informational purposes only and is not a recommendation to buy or sell any security.

5) From time to time, Streetwise Reports LLC and its directors, officers, employees or members of their families, as well as persons interviewed for articles and interviews on the site, may have a long or short position in securities mentioned. Directors, officers, employees or members of their immediate families are prohibited from making purchases and/or sales of those securities in the open market or otherwise from the time of the decision to publish an article until three business days after the publication of the article. The foregoing prohibition does not apply to articles that in substance only restate previously published company releases. As of the date of this article, officers and/or employees of Streetwise Reports LLC (including members of their household) own securities of Algernon Pharmaceuticals, a company mentioned in this article.

1. The following companies discussed in this broadcast have paid a fee to participate: Algernon Pharmaceuticals.

2. This broadcast does not constitute investment advice. Each viewer is encouraged to consult with his or her individual financial professional and any action a viewer takes as a result of information presented here is his or her own responsibility. This broadcast is not a solicitation for investment. StreetSmart Live does not render general or specific investment advice and the information should not be considered a recommendation to buy or sell any security. StreetSmart Live does not endorse or recommend the business, products, services or securities of any company mentioned here.

4. From time to time, StreetSmart Live and its directors, officers, employees or members of their families, as well as persons interviewed for broadcasts and interviews on the site, may have a long or short position in securities mentioned. As of the date of this broadcast, officers and/or employees of StreetSmart Live (including members of their household) own securities of the following companies discussed in this broadcast: Algernon Pharmaceuticals. Algernon Pharmaceuticals does not currently have a consulting relationship with StreetSmart (description available at https://www.streetwisereports.com/disclaimer/html#consulting).

5. Christopher J. Moreau is CEO and Dr. Mark Williams is Chief Science Officer of Algernon Pharmaceuticals; both own securities of the company.

I, or members of my immediate household or family, own securities of the following companies discussed in the broadcast: Algernon Pharmaceuticals

I personally am, or members of my immediate household or family are, paid by the following companies discussed in the broadcast: None

My company has a financial relationship with the following companies discussed in the broadcast: My husband’s company has a contract with Algernon to do PR but I personally do not.

I, or members of my immediate household or family, own securities of the following companies discussed in the broadcast: Algernon Pharmaceuticals

I personally am, or members of my immediate household or family are, paid by the following companies discussed in the broadcast: I am a member of the Medical Scientific Advisory Board of Algernon Pharmaceuticals and so am a paid consultant to Algernon.

This news is published on the Investorideas.com Newswire – a global digital news source for investors and business leaders

Disclaimer/Disclosure: Investorideas.com is a digital publisher of third party sourced news, articles and equity research as well as creates original content, including video, interviews and articles. Original content created by investorideas is protected by copyright laws other than syndication rights. Our site does not make recommendations for purchases or sale of stocks, services or products. Nothing on our sites should be construed as an offer or solicitation to buy or sell products or securities. All investing involves risk and possible losses. This site is currently compensated for news publication and distribution, social media and marketing, content creation and more. Disclosure is posted for each compensated news release, content published /created if required but otherwise the news was not compensated for and was published for the sole interest of our readers and followers. Contact management and IR of each company directly regarding specific questions.