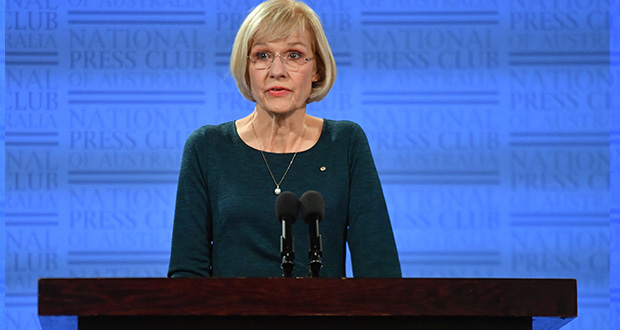 In a speech to the National Press Club in Canberra on 26 February, Terry highlighted the benefits of university expertise during what has been a “summer of sorrows”.

“Our university researchers have been some of our most valuable guides and interpreters in countless news stories during the bushfires, drought, hailstorms, and dangerous smoke,” Terry told the audience.

“So, too, in the face of coronavirus, university expertise has been crucial. A team at the University of Queensland has been at the forefront of the global race to develop a vaccine in record time.

“We are so grateful to each of these university experts who have shared their knowledge to help Australia and the world contain this threat,” she added.

Attempts to contain the coronavirus outbreak has left almost 300 million students out of school due to closures in a growing number of countries, while in others, total bans on study abroad activity are being enacted.

During her address, Terry also discussed the cultural and societal value of international education, which she described as one of the great Australian success stories over the past six decades.

As of 2020, she told the audience, the country’s 39 universities have almost half a million international students, bringing nearly $40 billion a year into the Australian economy.

Australia has grown into one of the world’s most compelling choices for young global scholars who could choose to study anywhere,” she noted.

“[And when we bring Australia’s best researchers together with others at the leading edge of that same field in Japan or China or Singapore or Germany, the UK or the US, we speed advances.

“Rather than retreating into isolation… we must always remain open to the world – and engage deeply in the world.”

Taking questions from the audience, Terry lamented the “deeply stressed” students and staff who were forced to remain in China due to the travel ban, and explained that it is “too early to tell” the full extent of the financial impact of the ban.

It is estimated that around 100,000 Chinese students – 56% of the total Chinese student population –  were unable to return to campus following the February travel ban.

According to University of Sydney vice-chancellor, Michael Spence, a worst-case scenario where most Chinese students fail to attend for all of 2020 would result in a $2.2 billion hit to NSW’s gross state product.

“Our focus at the moment, and as it should be, is entirely on public safety and our role and on the wellbeing of our students… ensuring that we are communicating with them regularly [and that] we are able to provide them with the assistance they need where possible,” Terry continued.

“In the background, we are looking at what the implications of that [may be] but that is not what is taking up our time at the moment.”

Terry said that UA has been looking at alternative delivery methods for many courses across the country’s universities, such as utilising online delivery where possible in a bid to keep as much as possible to keep students caught up in the travel ban going with their studies.

Responding to a question from The PIE News as to whether UA will be recommending a fee reduction for the period in which students learn online, Terry explained that each university is looking at ways to acknowledge that the student experience for many has been less than what was expected.

“We are all looking forward to and are hoping to welcome our students to each of our campuses as soon as possible [and the] student experience is one of the major factors that attract so many international students to our universities,” said Terry.

“We understand that in this semester particularly, the experience that students are going to have is different from what they had anticipated.

There may be fee remission arrangements, there may be other arrangements. They are being actively looked at in each university because we understand that the experience for the students this year is not as as as it would have been if we weren’t dealing with this [coronavirus] situation,” she added.

Terry concluded by addressing concerns that the country has have become overreliant on China for research, as well as international students.

“All of our institutions recruit international students from all over the world. Many of our universities have offshore campuses, transnational arrangements and other vehicles for teaching offshore,” she said.

“We do obviously have large numbers of students from China who are attracted to study here because of the quality of what we offer in terms of research.

“And the strength, the great strength of Australian research is that we are internationally connected, we are globally-connected,” Terry added.