“I was offered the option of paying 8800 yuan (£989) to receive the visa within 24 hours after contacting the visa centre in Beijing on 28 August,” a Chinese student said on social media, “But UKVI told me that the decision of my application had been made on 16 August.”

The student was offered the express service from someone claiming to work for VFS, which the UK government has contracted to manage visa centres in China.

Another student Jean told the PIE that she changed her flight from September 13 to September 22 as a result of visa delays, which, according to the UK embassy in China, are down to a high volume of applications UKVI has received.

“I will take my first lesson on September 21 at the airport and have to pay the rent of the flat even if I am not there,” Jean said. However, unlike those who booked chartered flights by UK universities, Jean will still be able to claim refunds or flight changes.

According to UKVI, standard applications that students apply for will be 100% processed within 15 working days and costs 3,251 yuan (£365).

The visa centre in Beijing informed students that as a result of premium services being overbooked recently, the process of standard services has been delayed further. Many Chinese students are requesting faster decision making from UKVI so they will not have to involuntarily seek premium services.

However, on VFS Global’s website, three other priority visas are offered by UKVI, with the most costly priced at 8844 yuan (£994). VFS Global also provides additional premium services packages up to 851 yuan (£96). A student told The PIE that the prices charged in the visa centre in Hangzhou have been changing frequently as they are covered by tape to be written on. 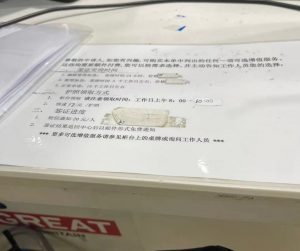 Fees covered by tapes to be written on. Photo from Chinese students

An agency in China told The PIE that previously it took around 20 days for the standard visa to be delivered and now it would be 30-35 days.

Some students contacting the visa centres about their application delays by email waited several days to receive responses, while waiting times on phone calls cost some up to 300 yuan (£34).

Students also raised concerns about the services visa centres are providing, for instance, some of the notifying messages VFS sent to the students are illegible. 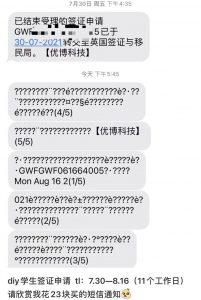 Messages from visa centres reminding students to pick up their documents, cost 23 yuan (£2.6), and are illegible. Photo from Chinese students

Some also revealed they paid over 800 yuan (£90) cash only for walk-in service which was not listed on the UKVI fee table or presented on their receipt.

Students and parents queued in the early morning, in extreme cases at 3:00 am, in front of the visa centres to be served earlier.

The British Embassy issued three statements on September 3, saying that it had launched an urgent investigation into the situations raised by the students. In order to deal with the “global demand” for visas, officials worked over the weekend to increase processing capacity of visas. They will continue working during future weekends, the statement added.

“Our student visa team has noticed up in speed since,” Amanda Wang, managing partner at UVIC told The PIE.

“However due to the number of cases pending from the previous months the delay is still happening at the moment.”

The PIE contacted VFS Global and UKVI for comments but received no response by the time of publication.