Delaware Museum of Nature and Science to reopen, transformed and TikTok-friendly 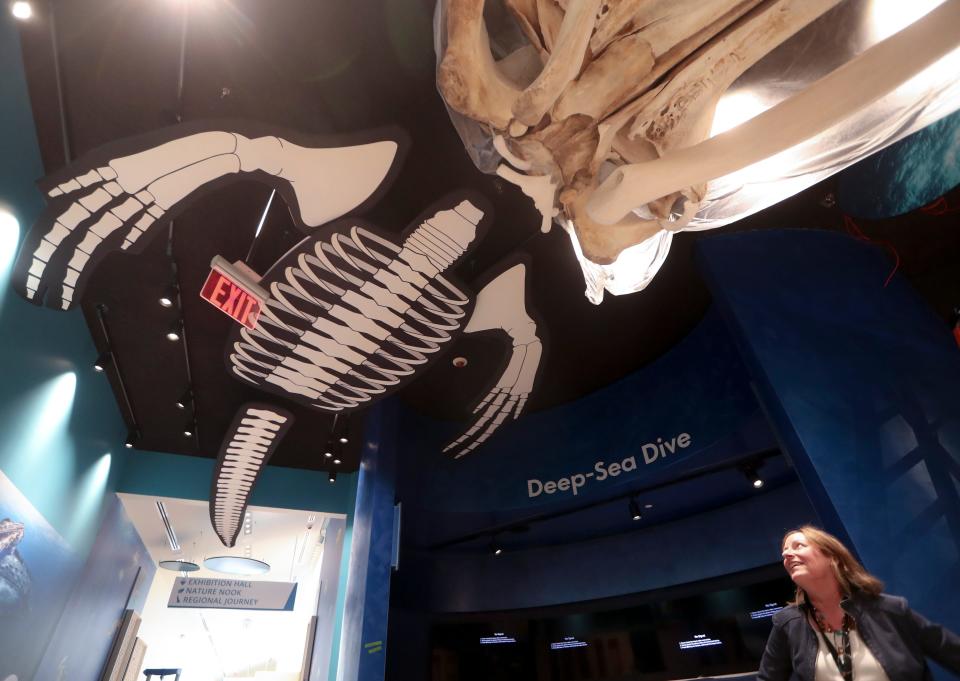 The inside of Delaware Museum of Nature and Science used to look vanilla. Its layout was comparable to a “shoebox,” in the words of executive director Halsey Spruance.

Now the renovated and rebranded museum, formerly named Delaware Museum of Natural History, has the vibrant appeal of a pair of Nike Air Jordans with a price tag of $10.8 million.

The museum closed at the end of 2020 for a 17-month renovation project, which included building new exhibits and public spaces.

All of the exhibits, many in place for 50 years, were removed and the walls taken down to the studs. Installations of the new exhibits had been ongoing since the end of 2021.

The revamped museum will greet guests who will be able to celebrate the 50th anniversary of the Wilmington museum by interacting with its new galleries, updated technology, a newly installed floor map of Delaware, and much more.

An opening is set for the general public on Monday, May 23.

Spruance said the reimagined museum offers a more TikTok and Instagram-friendly environment where guests should feel encouraged to share more photos and video on social media as the aesthetics are much more attractive.

Jazzing up the museum was necessary, Spruance said, because he and his team wanted guests to have a magical experience like they’re at Disneyland, instead of feeling trapped in a gray, stuffy box.

“When the museum was first built in 1972, it really looked like a giant shoebox. It looked like a place where you stored stuff. And that was intentional. That was the intention of the founder,” Spruance told Delaware Online/The News Journal.

The museum is known for its large collection of mollusks and bird eggs. Its collection includes more than 2 million mollusk specimen, the 10th largest collection in North America, representing over 18,000 species, according to the museum’s website.

Also in its permanent collection are more than 36,000 clutches of bird eggs, the second largest collection on the continent. A bird can lay multiple eggs in one sitting for a clutch; one clutch can be anywhere from one to six eggs or more, depending on the species of bird, Spruance said.

For nearly 10 years, the museum has had plans to upgrade its exhibits and technology (including adding more interactive elements and e-readers so visitors can learn more about animals and their environment) through its multimillion-dollar renovation project.

Recognizing that the project would be a major undertaking, the organization’s leaders agreed the museum also needed to rebrand to reflect those changes, the executive director explained.

“Our focus is on what we know about nature and science, why it matters to us, and what we can do to protect the environment,” Spruance said in announcing the changes. “There’s a huge emphasis on how we are all connected and how our actions matter.”

Guests returning to the museum will find it is now divided into two main gallery spaces, one focused on Delaware and the other offering more of a global adventure.

Little things are big at museum

One of the new features at the Delaware Museum of Nature and Science is its Regional Journey Gallery, which shines a light on the state’s Bald Cypress Swamp, forests, a saltmarsh, dunes and the Delaware Bay.

The space features a huge floor map of the state, along with lifelike dioramas like scenes of chipmunks near their den, an oyster reef, a slug on a tree and a crawling turtle, among other wild things.

As with many features in the renovated museum, the chipmunk scene is low to the ground so the museum’s youngest patrons can enjoy it at eye level. At the same time, there is plenty for older kids, teens and adults to explore as the installations make innovative use of vertical space from ceiling to floor.

There are a lot of fascinating things to see in nature that people often miss because they’re moving too fast, said Helen Bilinski, director of exhibits, or because they are focused only at what’s at eye-level.

To get the most of a visit to the new galleries, be sure to look up high and down low.

Young plumber: He hopes to repair 2020 damage as Delaware looks forward to prom

While there are plenty of “big” things to see, the museum also wants guests to be present for the “little” things, such as the tiny slug crawling on a tree that’s hard to spot, unless you’re looking for it.

There are a number of hidden Easter eggs like that at the museum now, giving visitors lots of incentive to return.

When dinosaurs ruled the East Coast

In the Ellice & Rosa McDonald Foundation PaleoZone, guests will encounter creatures that lived in the Mid-Atlantic during the Cretaceous period.

There are skeletons of the Dryptosaurus dinosaur, the flying “bat lizard” Nyctosaur and the aquatic giant Mosasaur, joined by smaller Cretaceous specimens.

The Mosasaur, by the way, loved to take a dip in the pool around Delaware.

“The Mosasaur was a giant, humongous, amphibian reptile that plied the waters that were over what is now the Mid-Atlantic area,” Spruance explained. “Much of Delaware was actually underwater during the Cretaceous period. The Mosasaur was a giant carnivorous, frightening animal that was swimming around here.”

More: Museums all over the world count on South Jersey’s Kubik Maltbie for installations

Not just a vault for ‘specimen’

The second half of the museum is home to the Alison K. Bradford Global Journey Gallery, which features a giant floor map of the world, surrounded by three land-based ecosystems.

Those ecosystems include an African savanna with a large elephant; arctic tundra with a huge polar bear and artic fox; and a tropical rainforest, as well as three different ocean environments (shallow, mid-water and deep).

The rainforest will feel like a great escape with its ambiance of bird calls and other nature sounds, along with a display of animals native to that environment.

In the oceans area, be sure to look overhead, where you’ll find a large, fierce creature who loved the water. It’s a juvenile humpback whale that The News Journal reported on in 2017 when it was found dead at Port Mahon. The big fella’s skull is now suspended from the ceiling of the museum, thanks to a Maine-based company that specializes in whale restoration.

The whale is located near a coral reef exhibit, preserved from the museum’s previous incarnation. It can be viewed through a glass floor, offering a fresh view of the colorful underwater ecosystem. Walking across the exhibit the first time might be a little trippy because the glass might appear invisible.

In an atrium area, visitors will find a Tree of Life, depicting the evolution of organisms over billions of years and the relationships among them in increasingly diverse branches, according to press materials.

New amenities at the Delaware Museum of Nature and Science include the Rest, Relax, Recharge café with premade sandwiches, salads and snacks from Jamestown Catering, along with coffee, water and other drinks.

The Delaware Community Foundation Respite Room is purposed to provide a relaxing environment for guests with sensory challenges and developmental disorders so they can take a break. It’s also a quiet space that allows privacy for parents with nursing infants.

Since the museum was closed for more than a year, Spruance hopes visitors will feel extra motivated to check out the new exhibits and fresh setup, which is more open and interactive than the days of its shoebox layout and exhibits dating from 1972.

Open Call: At the heart of DSO is a friendship through music and time

The museum’s previous dioramas, Spruance said, were basically items on view behind glass. That’s no longer the case with the revamped version of the museum.

“It’s not just [a] vault of scientific specimens and dioramas. We’re opening it up to have more breathing space, more vitality,” he said. “Previous visitors to the museum will notice when they come in how vibrant and full some of the galleries are.”

Delaware Museum of Nature and Science (4840 Kennett Pike, Greenville) reopens seven days a week for the general public starting from 9:30 a.m. to 4:30 p.m., May 23. Timed tickets will be available at delmns.org in early May. Tickets are $12.95 for ages 3 and up; $3.95 for toddlers ages 1 and 2; and free for infants under 12 months. There is a $1 discount for tickets purchased in advance online. Admission is free for DelMNS members.

Andre Lamar is the features/lifestyle reporter. If you have an interesting story idea, email Andre Lamar at [email protected]

This article originally appeared on Delaware News Journal: Delaware Museum of Nature and Science is rebranded with TikTok appeal