Nonetheless, UCAS noted that the 140,000+ applications from outside the country indicates that the UK remains a “globally attractive” destination.

“It’s imperative that our visa application system remains flexible, accessible and competitive to enable students from all regions to come to the UK to study,” she noted.

Overall, there was a 7% rise the amount of 18 year olds being placed in universities including UK students, with 81% of students gaining a place in their first choice university or college.

“This year sees the return to exams and is the second year of what will be a decade of growth of 18 year olds in the UK population,” said Claire Marchant, chief executive of UCAS.

“As we are set to hit a million applicants, by 2026, it will be even more important that the higher education admissions system meets the needs of students in this increasingly competitive environment,” she continued.

Figures from HESA released earlier this week showed that the UK hit its target of 600,000 international students 10 years early.

Only 31,670 prospective EU students applied to UK universities through the admissions operator in 2021 – a staggering 40% fall on figures from 2020. 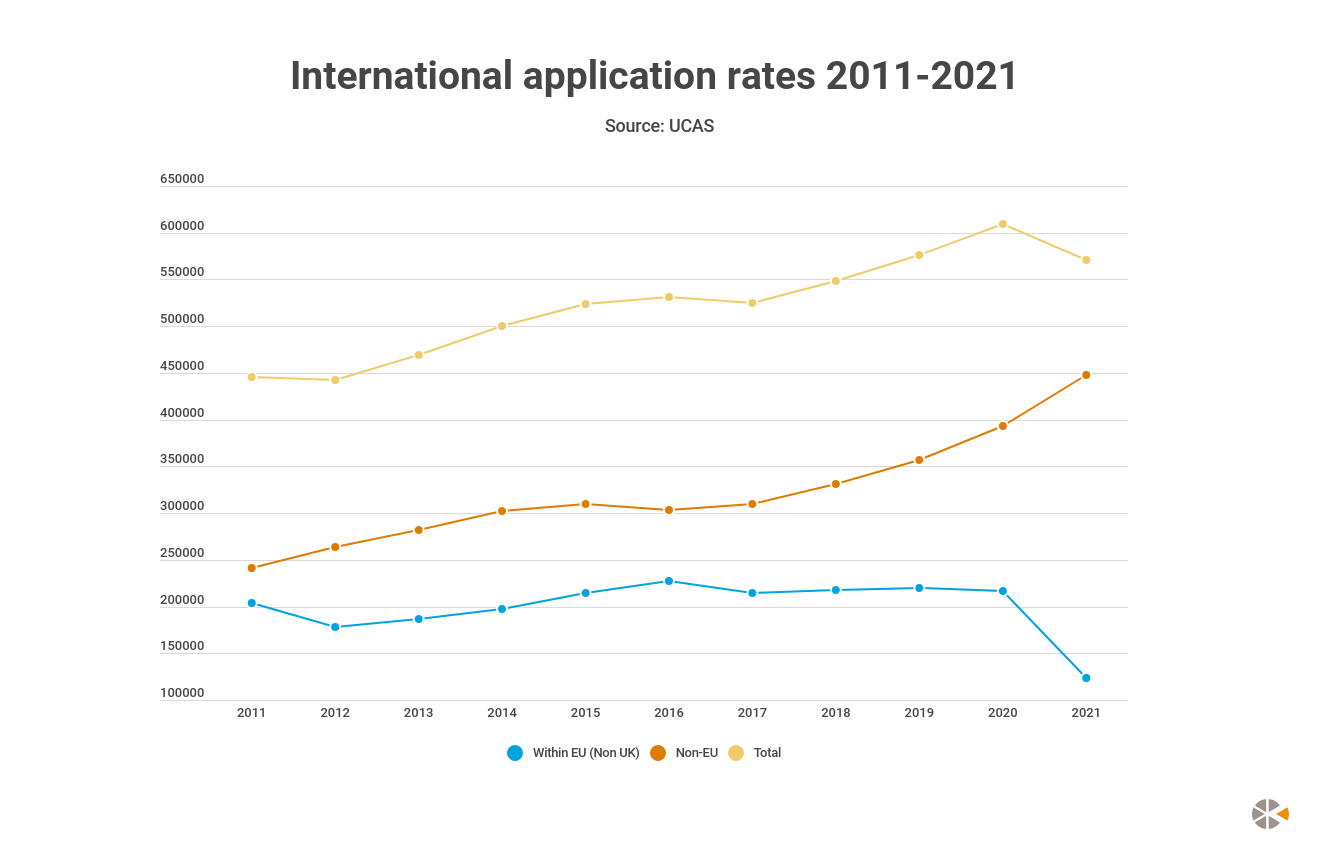 “Although the UK clearly remains a popular, welcoming study destination for international students it is disappointing to see a significant fall in EU applicants,” the UUKi spokesperson said.

“We will continue to urge the government to explore ways to encourage students from the EU to apply to UK universities, including through Study UK campaigns and new scholarship offerings,” the spokesperson added.

Broken down by region, figures showed that while most areas of the UK were decreasing, Scotland suffered by the far the biggest decrease in international applications in 2021, with a 52% decrease – 20,230 compared to 42,350 in 2020.

London and Northern Ireland had the only increases in international student interest – London saw 1.7% more applications from outside the UK, with 179,000 compared to 2020’s 175,995.

Northern Ireland, however, despite general figures being lower due to size and the amount of provider available, gained 28% more applications – 5,750 grew to 7,395 in 2021.

In UCAS’s recent Where next? The experience of international students connecting to UK higher education report, over half of those placed in UK universities from overseas in undergraduate programmes were from seven specific countries – two of every nine of those from China, concurring with the growth in placements of non-EU candidates.

“This highlights a potential risk to the sustainability of the UK’s international student recruitment should these high-volume markets be disrupted,” the report said.

The report indicated, concurring with the latest data, that nearly nine out of 10 international students found the UK a “positive place to study”, but 72% of those surveyed in the previous report said they needed “more information about what their year would look like”, and how Covid would impact it.

Despite that, UCAS said upon the release of its 2021 cycle findings that overall, there was a “strong demand for UK higher ed amidst a global pandemic”.