A “sizeable proportion” of agents – ranging from 16-31% of agents, depending on destination choice – are recommending students consider an alternative destination country.

The findings are from the Navitas Agent Perception Report, which surveyed some 900 agents in 73 countries around the world in March 2021.

“Our experience working with students and their parents over the last 12 months tells us that they are committed to continuing their studies and have a strong preference for face-to-face delivery,” the report read.

However, the challenge for many agents is convincing parents and students to opt for commencing online studies is a better option than “waiting for borders to open [which] only places them in a longer queue for admission, visas and flights once travel is possible”.

Asked what they would recommend, agents overwhelming said their default recommendation was to begin studies online. Over 70% of agents said studying online until travel is possible was the suggestion for students choosing the Canada and UK, chiming with findings from previous Navitas research.

The first half of the report, previously released in April, suggested that UK and Canada continue to look poised for a rebound and the US shows signs of a “remarkable turnaround”.

The ratio of agents recommending beginning online studies dropped to around 65% for Australia and just over 50% for New Zealand, this latest survey noted.

Additionally, the survey found that 16% of agents with applicants to the UK urged them to have a back-up option in a different country. This extended to 18% saying the same for Canada and Australia, 25% for New Zealand and 31% for the USA.

“This represents a substantial proportion of students that are being advised by their agents to switch study destinations, or at least be prepared to switch with backup applications to other countries,” the report noted. 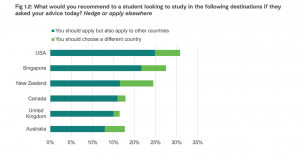 Very few agents – between 0-4.5% – are recommending students cancel their plans to travel and study fully online.

Again, continuing trends from the previous release of the survey, the research found that more than 20% of respondents strongly agreed that the UK, Canada and Singapore had seen more interest as an education destination compared to other countries in the two months up to March.

However, most countries are rated as ‘safe and stable’ with the exception of the UK (47%) and the US (18%), the report noted.

While the UK “continues to be most appealing in the eyes of agents in the Greater China region, scoring a chart-topping 78%”, the US has only recorded around 9% of agents strongly agreeing there has been more interest in the previous two months.

“The silver lining for Australia is the fact that its relatively low score on safety and stability does not appear to have dampened interest too severely, with the proportion of agents reporting interest in studying in Australia being sustained at 53%. It remains to be seen how long this is likely to continue,” the report noted.

Beyond Greater China, the survey noted that agents in South Asia are the most positive about interest increases for Canada and the UK. Australia and New Zealand are viewed “very negatively”, it added.

“Because Indian students are often motivated by the migration pathway that education provides, there is a reluctance to begin studies online when there is no date in sight for student entry into Australia,” the report read.

South Asian agents are most optimistic about the reopening of the US, the research also found, reflecting anecdotal evidence that the change in the US administration and the impressive vaccination roll-out have “created a good impression among Indian students and their families”.

The latest survey suggested that agents in South Asia anticipate strong growth in the next 12-24 months, it added, with Canada and the UK being the “likely beneficiaries” in 2021, and US seeing strong rebound in 2022.

However, the devastating second wave of Covid-19 across the South Asia region since the research was conducted may now be an obstacle, the report emphasised.

On the other hand, agents in South East Asia “continue to show strong appreciation for how well Covid-19 has been suppressed”, and the prospect of travel bubbles presents greater optimism among in the region for travel opportunities to Australia and New Zealand.

Additionally, the report found that Canada could provide an alternative to the UK for students in Europe looking to study overseas at an English-speaking university, given the repercussions of Brexit.