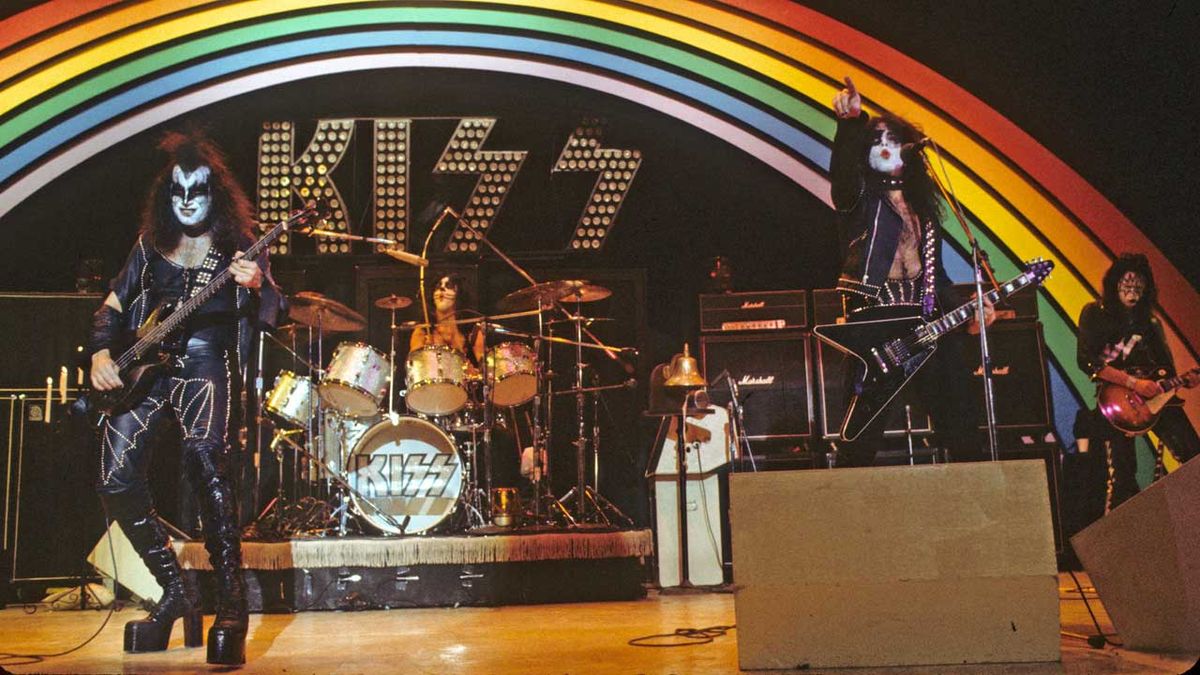 Launched on November 24, 1972 with a show that included Alice Cooper, Bo Diddley, Jethro Tull, Curtis Mayfield and Seals & Crofts, ABC’s In Concert series presented American viewers with something of a dilemma.

Produced by Dick Clark Productions, the show featured footage from recent live shows, but also battled for viewers with NBC’s own late night variety show The Midnight Special, which was broadcast in the same time slot. A full decade before the videotape revolution, users had to choose between the two shows, with no way to catch up with what they’d missed.

Cut to March 29, 1974. Over on NBC, The Guess Who are hosting The Midnight Special, presenting live entertainment from Slade, Wishbone Ash, David Essex, Leo Kottke, Judi Pulver and Sha-Na-Na. And on ABC it’s Foghat, Melissa Manchester, Redbone, Kool & the Gang, and an up-and-coming band from New York making their TV debut. They make quite an entrance.

“Hey World! We’re Kiss!” It’s a 22-year old Paul Stanley, and he’s already talking like Kiss are the hottest band in the world. “We want everyone here to come along with us. Because you’ve got nothing to lose!”

Kiss then launch into Nothin’ To Lose from their debut album, released the previous month. As song introductions go it’s cheesy and deliberately unimaginative, but it’s also perfect. Kiss are here to show us a good time, they’ll tell us we’re about to have a good time, and then we’ll all have a good time together. It’s not rocket science, but it is smart, and it’s a helluva lot more fun than David Essex.

They’re also fully formed. The show, the pancake, the costumes. Everything is in place. They can all sing, and they’re tighter than you might expect for a band who’d only left New York for the first time the previous month (a support slot with Rory Gallagher and Fleetwood Mac at the Long Beach Auditorium in California had followed an unlikely trio of regional Canadian shows).

The In Concert broadcast also features the classics Firehouse and Black Diamond. They also recorded a fourth, Deuce, but the song was never broadcast and the original tape was lost.

The show did what Casablanca Records hoped. Rather spend years slogging the North American club circuit, paying their dues, the label wanted to fast-track the band, getting them in front of the maximum possible number of people as quickly as possible.

And for a generation of American teens, the In Concert show was as pivotal as David Bowie’s iconic Top Of The Pops appearance two years earlier had been for his future UK audience. Kiss were other-worldly, and so much larger than life. They provided an escape from from boredom, from the humdrum. And they shone.

When Dick Clark died in 2012, Paul Stanley took to Facebook to pay tribute.

“As a little boy I sat transfixed to our television every afternoon and Saturday night watching American Bandstand,” he wrote. “Dick Clark was the face of rock and roll and its best ambassador.

“His decades of successes both in and outside of the music industry are unparalleled. He championed Kiss when others turned away and was instrumental in breaking us through his show In Concert.”

The band began the year playing for an estimated 135 fans at the Dinwoodie Lounge in Edmonton, Canada. By its end they’d sell out a pair of shows at the 5000-capacity Michigan Palace in Detroit. Kiss were on their way.