How a Brazilian dinosaur sparked a movement to decolonize fossil science 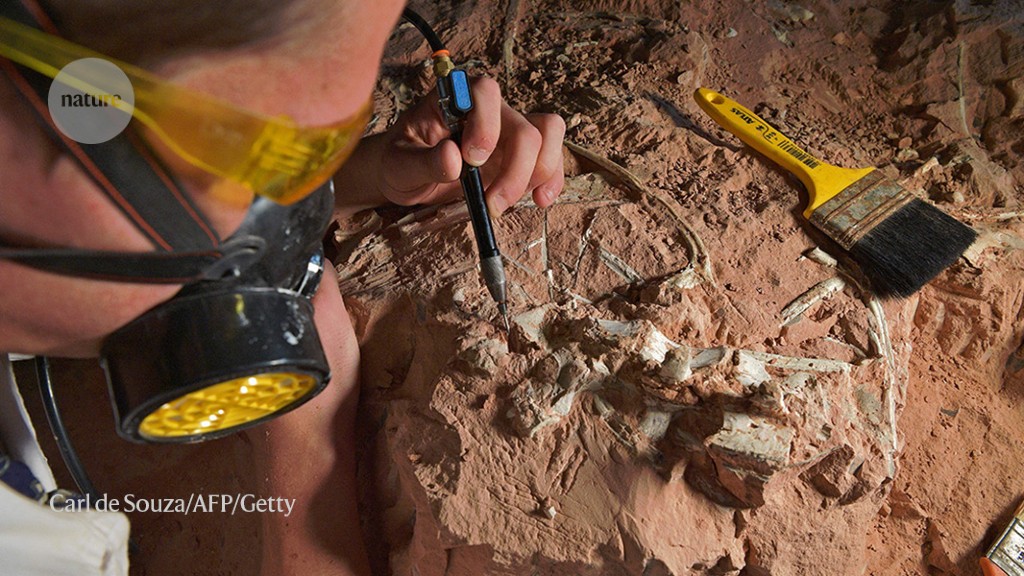 In December 2020, a paper in the journal Cretaceous Research sent shock waves through the palaeontology community1. It described a dinosaur species that the authors named Ubirajara jubatus — the first dinosaur found in the Southern Hemisphere to display what were probably precursors to modern feathers. The 110-million-year-old fossil had been collected in Brazil decades earlier — but no Brazilian palaeontologist had ever heard of it. The authors of the paper were from Germany, Mexico and the United Kingdom.

It was the latest instance of what some researchers now call palaeontological colonialism, in which scientists from wealthy nations obtain specimens from low- and middle-income countries without involving local researchers, and then store the fossils abroad. The practice can sometimes be illegal. For instance, according to Brazilian law, the country’s fossils belong to the state, although the authors of the Ubirajara paper say that they had a permit signed by a Brazilian mining official allowing them to export the specimen. “As far as the authors are aware, the specimen of Ubirajara was obtained legally,” says David Martill, a co-author and palaeontologist at the University of Portsmouth, UK.

The practice can also deprive nations of knowledge and heritage, say researchers. “Fossils are special to us,” says Allysson Pinheiro, director of the Plácido Cidade Nuvens Palaeontological Museum in Santana do Cariri, Brazil, near where U. jubatus was found. “We have literature, arts and crafts, and music based on them.”

Unlike previous incidents, however, the publication of Ubirajara sparked a revolution.

Through the Twitter campaign #UbirajaraBelongstoBR, Brazilian researchers protested against the paper, which was eventually withdrawn, and called for the fossil’s return. The Ubirajara specimen is currently located at the State Museum of Natural History Karlsruhe in Germany, but officials say that the museum is involved in negotiations to send it back to Brazil.

Even more significantly, the incident prompted paleontologists and paleontology associations across Latin America to join forces to end the practice. The growing movement is even attracting interest from scientists in Mongolia and other countries beyond Latin America that are affected by colonial palaeontology.

Juliana Sterli, president of the Argentinian Paleontological Association in Buenos Aires, describes the Ubirajara episode as the “last drop”. “In previous situations, we didn’t express ourselves,” she says.

One of the fruits of the movement has been the publication of journal articles surveying the extent of palaeontological colonialism in Latin America and elsewhere. In March, for instance, a report2 reviewed decades of papers describing fossils from Mexico and Brazil. The authors analysed almost 200 studies published between 1990 and 2021, and found that more than half did not include local researchers. Of the Brazilian fossils described, 88% were stored outside Brazil.

Some in the community, however, have disputed the paper’s findings. Martill says that the paper “is a pseudo-scientific study with a highly cherry-picked data set”, and adds that it ignores practices by US palaeontologists and focuses on European researchers. Martill was a co-author on papers highlighted by the survey.

Juan Carlos Cisneros, a palaeontologist at the Federal University of Piauí in Teresina, Brazil, and a co-author of the survey, says that it omitted some US collections of Brazilian fossils dating from before 1990. That is because the survey focused on vertebrate holotypes (specimens used as benchmarks for describing a species) studied after 1990, he explains. That is when Brazil passed a decree that requires international institutions studying fossils from the country to partner with Brazilian institutions. Cisneros adds: “It seems a clumsy attitude for researchers involved in such questionable practices to defend themselves by expressing that, in other countries, similarly questionable things are done.”

In the past, when issues of scientific colonialism were brought up with colleagues in wealthy countries, incidents were chalked up to anecdotal occurrences, he says. “Now that this is published in a scientific journal, there’s no way to ignore it anymore.”

Jeff Liston, president of the European Association of Vertebrate Palaeontologists, who is based in Edinburgh, UK, and has studied the illegal fossil trade in China, says that the scientific community has been aware of issues related to colonial palaeontology for some time — but the debate in the past few years has brought the discussion to a broader audience.

There are plans for more publications on the issue in Latin America — including papers discussing how journals can help to solve the problem. The palaeontological associations of Argentina, Brazil, Chile and Mexico plan to submit a letter describing how colonial practices are affecting palaeontology in the region to a scientific journal. “One of our goals is to raise global awareness about the responsibility of peer-reviewed journals in fighting colonial practices,” says Hermínio de Araújo Júnior, president of the Brazilian Paleontological Society, who is based in Rio de Janeiro.

In the March paper2, for example, the researchers found that none of the studies they reviewed reported having permits for taking the fossils abroad. “A big step would be to request the proper permits to study the material that they are putting into the journal,” says Karen Moreno Fuentealba, president of the Chilean Association of Paleontology, which is based in Santiago. “It would certainly be a way to enforce proper scientific behaviour.”

Some journals, such as Palaeontology, have already adopted policies that require authors to respect local laws when collecting and exporting samples. “PLoS ONE was one of the first journals to have a very tight set of ethical guidelines in terms of having to show collecting and export permits,” Liston says. (Nature also has this type of policy; Nature’s news team is editorially independent of its journal team.)

Latin American researchers have also raised global awareness of colonial palaeontology at international conferences. Last December, Cisneros presented research at the third annual Palaeontological Virtual Congress, in which he and his team analysed the impact of the #UbirajaraBelongstoBR campaign. The hashtag became a trending topic on Twitter in Brazil between December 2020 and January 2021, after the Cretaceous Research paper was published.

“Not only science communicators engaged in the conversation, but also influencers from the gaming world, artists and the news media gave it wide attention,” says Aline Ghilardi, a palaeontologist at the Federal University of Rio Grande do Norte in Natal, Brazil, who created the hashtag.

Liston notes these positive outcomes, but says that there were negative ones, too. Members of the public threatened the scientists and institutions involved in the Ubirajara research. The Karlsruhe museum’s Instagram account drew more than 10,000 comments — many of them negative — and was deleted in 2021.

In July, a panel will discuss scientific colonialism at the virtual Latin American Congress of Vertebrate Paleontology. The goal, according to Cisneros, is to promote true cooperation between palaeontologists. “We don’t want researchers from other countries to stop working here. What we hope for is that partnerships are more equitable and reciprocal. And that our laws are respected, as we respect the laws of other countries.”

Martill says he has no problem cooperating with local researchers, but he has questions about how far the movement will go to revise the field. “Should we be expected to [collaborate with local partners] when, say, a Brazilian fossil is in a German collection and has been for many years?” he asks, additionally wondering whether seeking out experts simply to add local collaborators could lead to tokenism. “I think this should be up to authors who do the science to decide who is an author.”

It’s important to acknowledge that ethical standards today are different from those of the past, even in Latin America, says Elizabeth Chacón Baca, president of the Mexican Society of Paleontology, headquartered in San Nicolás de los Garza. In Mexico, for example, fossils used to be offered as gifts by political leaders or academics to their international counterparts. “Scientific interest must prevail,” she says. “We must protect and defend [our heritage], but always with a tone of open dialogue.”

Latin American palaeontologists hope that their efforts will have an impact beyond their countries. According to a study published last December by Ghilardi and others3, the countries most affected by ‘parachute science’ — publications that make no mention of local collaboration — are the Dominican Republic, Myanmar and Namibia. In the first two, in particular, foreign researchers have become interested in fossil inclusions in amber deposits.

Palaeontological colonialism “used to be a discussion among friends and peers in between two sessions at a conference”, says Devapriya Chattopadhyay, a palaeontologist at the Indian Institute of Science Education and Research in Pune and a co-author of the study. Now, “it is getting quite a bit of deserved attention”.

“I’m really excited about this whole movement, especially in Brazil,” says Bolortsetseg Minjin, founder and director of the Institute for the Study of Mongolian Dinosaurs in New York City. She has helped to repatriate dinosaur fossils taken illegally from Mongolia, and sees parallels between her efforts and the campaign to repatriate the Ubirajara dinosaur.

Minjin strongly advocates that fossils remain in their places of origin. “In Mongolia, fossils have been out of the country for the last 100 years,” she says. “Now we are facing an issue: how to find the next generation of scientists?” When children don’t grow up seeing fossils as part of their heritage and aren’t exposed to knowledge that excites them, she says, there is little motivation to become scientists.