The third instalment of IDP Connect International Student Crossroads Research examined the attitudes and behaviours of more than 5,000 international students who hold current applications and offers to higher education institutions across Australia, Canada, New Zealand, the United Kingdom and the United States.

The study showed increasingly positive perceptions of countries that have remained open during the pandemic, but that many students are willing to change destinations to access face-to-face learning.

While the UK has benefited from its policy of allowing students into the country, the research says that there is a risk that students will switch destination countries to gain more face-to-face teaching earlier.

Among UK applicants and offer holders, 33% of respondents stated that they are likely to change destination if it enabled them to get face-to-face teaching earlier.

Simon Emmett, CEO of IDP Connect, said the research is a reminder of the ambition, resilience and eagerness of international students to pursue their lifelong goals.

“This year, international students have shown grit and resilience as they adapted their longstanding travel plans to accommodate Covid-19 challenges,” he said.

“Our research has shown that students are increasingly determined to commence their studies as planned, the majority (44%) are only willing to study online before transitioning to face-to-face for up to three months.

“They are seeking solutions and want support from universities and governments to help get them on to campus sooner,” he added.

“While New Zealand continues to lead in international students’ perceptions in student support and assistance, they are suffering the same overall perception challenges as Australia,” Emmett continued, which is “likely due to the strict border closures”.

Emmett explained that there is a “real risk” associated with being perceived as a country that is less “open for business”.

According to Emmett, countries that have communicated strongly that international students are welcome, such as the UK, have seen a rise in attractiveness compared to countries with stricter border controls, such as Australia.

Survey results showed that the UK’s policy of remaining open to international students throughout the pandemic has driven increasingly positive sentiment to the UK. 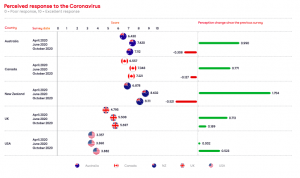 According to IDP the policy has also strengthened perceptions of the UK’s overall handling of the crisis amongst international student applicants and offerees. However, the UK still lags behind the key competitors of Canada and Australia on this point. 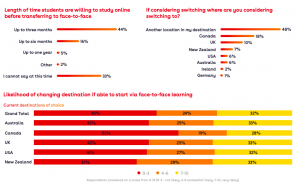 “It is encouraging to see this increasingly positive sentiment towards studying in the UK, in addition to the increase in the number of students aiming to start their studies as planned,” said Vivienne Stern, director of UUKi, which supported IDP Connect’s research.

“This reflects the resilience of both the sector and the determination of students wishing to study in the UK.

“Universities are working hard to welcome new students, to clearly communicate the experience new students can expect, and are being flexible where possible around start dates and learning options,” she said.

Stern explained that in the face of growing competition, the UK higher education sector needs to continue to work together, and with the government, to ensure the country remains open for international students, delivering high quality education whether online or face-to-face, where safe to do so.

Andrew Barkla, CEO of IDP Education added that the research is a reminder that “by failing to communicate support for students, Australia is at risk of damaging its reputation as a leading study destination”.

“We have confidence the sector can introduce travel corridors and quarantine programs that allow students to commence safely in Australia, which also enables the wider community to benefit from the many ways students enrich our towns and cities,” Barkla said.