The research, which was carried out in March 2021, aimed to evaluate the global language education sector and Canada’s position with it.

It explored key factors driving a student’s decision on study destination as well as the most impactful barriers to entry of international students into Canada’s English and French language programs.

During Languages Canada’s State of the Language Education Sector in Canada webinar, the report’s findings were discussed by Roberto Diniz, business solutions project manager at Bonard.

Diniz explained that Canada’s advantageous positioning was down to three factors.

“The first one is the perception of Canada as being safe and international student friendly. Second, the uncertainty around border closures in other destinations, for example, Australia and New Zealand. And number three, Canada’s handling of the pandemic,” Diniz said.

“Just for you to have an idea of students who are considering studying English abroad in 2021, the larger proportion of them are opting for Canada.”

For those who were considering studying French, Canada came in second place, with 32% – while the top destination was France (51%). 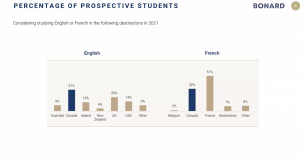 The research showed that agencies were anticipating that bookings made for language programs will go up over the next two years, although they won’t reach 2019 levels. The forecast for 2021 was 31% overall of 2019 levels and 55% overall for 2022.

Authors of Bonard’s report also looked at the anticipated operating capacity of language programs over the next 12 months. Bonard found that Canada’s language education providers anticipates an incremental recovery in student numbers over the next two years, rather than a sudden return to pre-pandemic levels.

Students’ perspectives and what was influencing their decision making process was a key point of investigation in the report.

This was followed by best outlook for getting a job (21%) and best safety measures at the destination (16%). The affordability of the destination was also a factor (13%).

“Entry conditions to Canada are a concern for both language education programs and education agencies. 91% of programs see these restrictions as the biggest obstacle to hosting more international students in Canada,” explained Diniz.

“Students are opting to defer their studies rather than bear the extra associated costs,” he added.

Bonard identified a number of barriers to students who consider studying English or French in Canada according to programs. They conducted a survey of Languages Canada members on this subject. Programs were asked to select up to three responses.

The main barrier identified was entry conditions to Canada (91%). Visa processing times was also deemed a significant barrier (56%) as was students’ fear of not having the full language and cultural experience due to restrictions.