While speakers praised the potential of technology on young people’s education, alarming statistics about the increasing number of reports of online sexual abuse affecting school-aged students were also revealed.

Susie Hargreaves OBE, CEO of charity Internet Watch Foundation, dedicated to global elimination of child sexual abuse imagery online, revealed a number of headline findings, including increases in the number of pages reported to them (299,600, up 15% on 2019) and the number of webpages showing images or videos of abuse (153,650, an increase of 16% on 2019).

“[The content] might be people in their teens who have shared images and then they made their way onto the internet. Or it could even be children being groomed, exploited online,” Hargreaves explained.

ACS Egham alumnus Ryan Hartman, now a software engineer at Microsoft, highlighted the ability of technology to open doors, but underscored it with a health warning.

“Technology has an immeasurable capacity to have a positive impact on the lives of people globally, but it’s important to be aware of the dangers technology can bring. There’s a dark side to the internet that students need to be aware of to protect themselves and others,” he said.

“People are online all day because of using online education. Perpetrators were online as well, so this creates the perfect storm where children could be preyed upon,” continued Hargreaves.

Hargreaves also stressed that children “shouldn’t be accepting friendships from people who [they] don’t know – behave online in the same way you behave offline.”

Speakers urged parents and children alike to reach out for help from IWF or other organisations like Childnet.

Hargreaves described Microsoft as “very much in the forefront of child protection and keeping people safe online”.

Microsoft’s Photo DNA program applies a digital fingerprint to known images of child sexual abuse, which IWF can then  find many duplicates of online, she said. 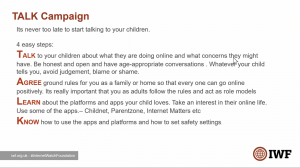 IWF is advancing a four-step plan to encourage parents and carers to talk honestly, and at an age-appropriate level, to their children about their online activities.

“[Technology] plays such a big part in our daily lives already after all,” explained Ryan, adding that it is “undeniable that in the future we will all be required to have some grasp of how programming works”.

“Technology has an immeasurable capacity to have a positive impact on the lives of people globally,” Ryan acknowledged. “But it’s important to be aware of the dangers technology can bring.”

He added, “Whether a student is interested in technology as a career or not, they should make the most of their spare time by playing with the programs and software available at school and at home; there are so many free resources available online to help a student develop their capacities and understanding of tech.”