In a year when inbound communications from students have increased tenfold adding pressure to admissions teams, a report from Edified and UniQuest recommends simple tactical improvements universities can make to “deliver a better enquiry experience and positively impact conversion”.

Using six mystery shopper personas – three of which were international students from key UK enquiry markets in the US, India and Nigeria – researchers found that only one in six enquiries received a follow up message.

Along with the other headline statistic of one in four enquiries not receiving a response, Newall said the analysis shows areas of “lost opportunity” for the 53 UK universities and one Irish institution involved in the research.

“If you’re not communicating with the students, it’s very, very unlikely that you’re going to be able to keep them engaged, build that relationship and convert them into being an enrolled student,” she noted.

The research emphasised the need to communicate why a student should choose your university, as they are potentially enquiring with alternative universities. Responding to enquiries within five days gives students “that encouragement to go on and apply”.

“If every response sounds exactly the same, you’ve got to find a way to stand out and show them how you’re going to be a great choice for them,” Newall said. One good way to stand out is via channels like live web chat and mobile messaging, she suggested.

“Only 6% of the universities in the study actually offered a WhatsApp or Facebook Messenger. And those are incredibly popular channels for the demographic of students that are going to university.”

Peer-to-peer and live chat channels are popular, with over half of the 54 universities offering live chat and 80% a tool like Unibuddy, The Ambassador Platform or their own system.

The research also found that the University Alliance group of institutions and the Welsh universities, on average, achieved slightly higher mystery shoppers’ satisfaction rates than the UK average. 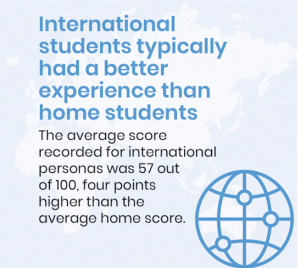 Additionally, the research found that one fifth of communications were described as “cold or overly administrative” in the language.

“Only one in three were described by our mystery shoppers and also by our own analysis as having a warm and engaging feeling.

“Every communication with a student is a chance to position your university and form a relationship with the student,” Newall added.

“It is a time of unprecedented choice across all of the areas that we are work in,” Natalie Letcher, co-founder at UniQuest, said.

“Technology has given students across the world incredible access to huge amounts of information, education points via university websites, via aggregator sites, via peers, student ambassadors, career services, families and it’s made it easy to connect to potential universities. But at the same time, it’s shortened the average attention span.”

While “stealth applicants” [students who make no contact with universities before application] comprise the bulk offer holders, the 9% of offer holders that enquire before applying actually lead to 17% of enrolments, Letcher detailed.

UniQuest research from 2018 found that 85% of students in the 2016/2017 academic year had applied without making any contact before application.

“Those that get a great experience convert from offer to enrolment at more than twice the rate of others. We consistently find that students need a meaningful, authentic and relevant approach. And when we can engage in the relevant reciprocal communications, they are hugely more likely to enrol.” 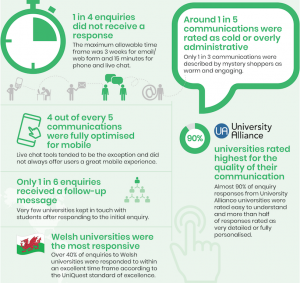 The tenfold increase in enquiries has added “huge pressure on CAS teams, on admissions teams”, she noted.

“With the changes that we’ve seen over the last 18 months to two years, the sector is completely unrecognisable from where it was, just in terms of those student expectations, student behaviours and student interactions.”

The sector will have to adjust to meet those student needs, Parsons hinted.

“It’s 20 years on and that’s still the situation”

However, one thing that had remained consistent since UniQuest ran its first mystery shopper survey some two decades ago is the number of unanswered enquiries, Letcher concluded.

“When we first did mystery shopping 20 years ago, probably one in four or five enquiries went unanswered and it’s 20 years on and that’s still the situation. I think that was surprising. I did think that there would be more consistency, I think, from the sector in dealing with prospective students.”

“We’ll see what happens next year because we will be coming on to do the same research program sometime [then],” Letcher said.