A total of 666,815 students in 226 countries joined TNE programs at 142 UK higher education providers in 2018/19. China hosted the most students for the academic year with 78,175 students, ‘The Scale of UK Higher Education Transnational Education 2018-19’ report highlighted.

For the second year running students enrolling on TNE courses declined, however, student number grew when the three main providers of distance, flexible and blended TNE were excluded from statistics.

The report noted that “the gap between large and small TNE providers is closing”, while numbers of students enrolling with Welsh and Scottish providers are growing faster when compared to providers in Northern Ireland and England.

“At a time when travelling across the world to enrol in a degree program has been thrown into question, it is fantastic to see more UK institutions delivering UK TNE than ever before,” said director at Universities UK International Vivienne Stern.

Provision is diversifying beyond a concentration of “relatively limited number of providers”, the report added, with three new UK providers reporting TNE students for the first time in 2018/19, and an additional five reporting more than 1,000 students.

While student numbers in providers reporting more than 10,000 students fell by 7.5% year-on-year, these statistics point “to a widening of the ‘long tail’ and a progressively more even distribution of student numbers among providers”, researchers noted.

Types of provision that students were opting also changed in 2018/19, with the number of students registered at an overseas partner organisation decreasing by 38,095 (-9.6%) since 2014/15.

Over the same time period, total numbers studying via collaborative provision increased by 29% – almost 37,000 students – and those at overseas campuses rose by 6,235 (27.4%).

Stakeholders have previously called for TNE to be a “major part” of finding flexible, scalable, relevant, non-colonial models of engagement going forward.

Overall, student numbers in Asia and the Middle East peaked in 2016/17, but when the three top providers are excluded, statistics show that over the past five years TNE students in Asia have increased by 22,135, while the EU has risen by 16,140. 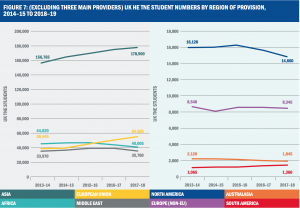 “At UUKi, we’re passionate about opening up UK higher education opportunities to those outside the UK, and the proportional increase seen in collaborative provision is reflective of the strong links UK universities continue to foster with international partners,” Stern added.