The program, announced today by the European Commission, will allow “symbolic” animals such as the Gallic Rooster in France, the European Bison in Poland, the Brown Bear in Finland and Denmark’s Red Squirrel to access funding to travel to other Erasmus program countries in order to experience life in an overseas zoo or wildlife park and meet contemporaries of their species.

“Wild birds are a migratory species, and Portugal has many varieties”

The program will begin in 2022 to celebrate the 35th anniversary of the Erasmus program. Although the UK is no longer an associated Erasmus country, a special exemption will allow the UK to participate in the program.

Joe King, head of the fauna exchange at the Irish National Agency for Erasmus+ EURIreland said that both the Irish Hare and Red Deer would be eligible for funding.

“Both creatures have been described as Ireland’s national animal,” he said. “Therefore, both will have access to join this innovative program. Likewise, if any Irish Elk, which are officially extinct, do come forward, they will also be eligible.”

Countries which have a national symbol that is a mythical creature, such as Scotland’s Unicorn, the Rooster of Barcelos in Portugal and the Red Dragon of Wales, will be permitted to propose alternative animals to join the initiative.

A spokesperson from Portugal’s Agência Nacional Erasmus+ Educação e Formação said that because the Rooster of Barcelos is mythical, the program will be open to other breeds of birds.

“Wild birds are a migratory species, and Portugal has many varieties,” the spokesperson said. “This program gives birds that may not usually have the opportunity to travel, to meet new people and animals, study and see new places.” 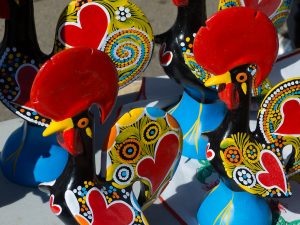 The symbolic Rooster of Barcelos

The agency will also encourage people travelling with the alternative bird species to dress the participants in the traditional bright colours of Rooster of Barcelos in order to “bring the true flavour of Portugal to the participants’ destinations”.

If successful, the program will seek to expand in the future to include more destinations and participating countries.

Speaking to The PIE, a breeder of British bulldogs said they expect around 30 of its dogs from the UK to participate on that program in the 2022-23 academic year.