According to data from the country’s Department of Home Affairs, Australian offshore student visa numbers dropped by a third (33.5%) in the 2019-2020 financial year compared to the previous year, with an 88% drop in applications in May alone.

IEAA CEO Phil Honeywood said the organisation was “happily surprised” that key market China has only retracted by 19.9% compared with the previous period, however, India dropped by 46% and Nepal was down more than 60%.

“We have to ask some questions: why is it so? And are these students actually going to other markets such as the UK?” said Honeywood during an AIEC webinar.

“Or are these students concerned about post-study work visa applications, which we hadn’t clarified with the visa flexibility package at the time the data started being put together.”

Honeywood added that it might also be the case that due to the financial impact of the pandemic, some students in those countries did not have the funds to pay for a student visa.

“The other point is that Australia overall has been containing the virus much better than most other countries. My Indian friends say that’s a plus point, but the borders stayed closed too long,” he added.

Honeywood said work needs to be done to find out more about this pattern of student behaviour, which was echoed by webinar attendees on social media.

Australia has also noted a substantial rise in student deferments in 2020, involving either a delayed commencement or a temporary suspension of an existing enrolment. 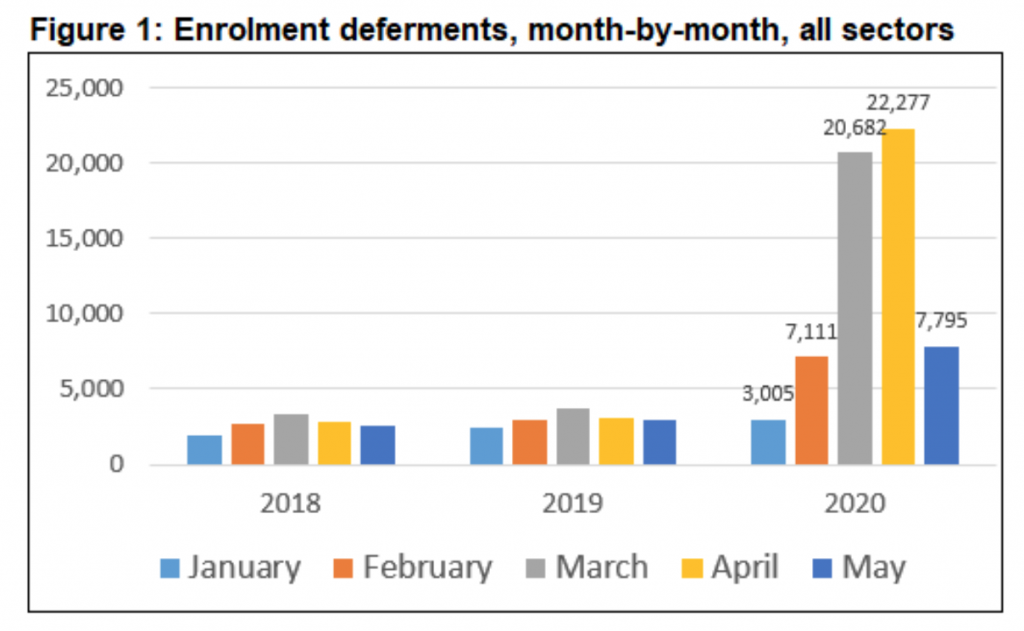 Earlier this week, a pilot scheme to let 300 overseas students into South Australia in September was announced by Australia’s trade minister, which was widely welcomed by the sector.

He indicated that some good news according to an upcoming survey from Deloitte, not many students are planning to change from Australia to another country.

“That is because – what we’re hearing from student surveys – we’ve got a world-class health system, we’re likely to have quicker economic recovery than some of the countries that we’re competing against and also there is a  strong desire for face to face and not online learning to continue,” Honeywood explained.

However, he added that there are certain areas where Australia “needs to play catch up”.

“I think one of the lessons we’ve learnt from this pandemic is we need to look at more comprehensive transnational education and school sector strategies, as we’re finding more and more international high schools are teaching Canadian and UK matriculation year 12 university entry certificates.

“I think it’s been too easy for Australia in past years to just rely on students coming to study in Australia itself and not to really have any offshore campuses.”