Regulatory framework a barrier for UK TNE in Morocco

However, the Understanding the opportunities and barriers in Morocco paper from the British Council also found that the untapped opportunities will only be possible when barriers are addressed.

The research found that an absence of a formal TNE regulatory framework in the country presents a “legal void” for foreign universities seeking to establish a presence in the country.

“The current system is seen as confusing, difficult to navigate, and uncertain as to whether TNE qualifications would be recognised – though four French HEIs (all engineering schools) have thus far gained official recognition from the Moroccan state,” the paper reads.

“The UK is underrepresented in Morocco”

Seven French HEIs are active in the market in total, while Cardiff Metropolitan University is the only UK university with a TNE presence in Morocco. Coventry University is aiming to open a branch campus in Casablanca in 2022, as well as a new joint school of health sciences in Ben Guerir, the report noted.

A “landmark” 2019 UK – Morocco Schools Agreement has resulted in the official recognition of four British schools: three in Casablanca and one in Marrakesh, the research also found.

There is an “insatiable” appetite for English and English taught programs, Andrew Murrison, UK Prime Minister’s Trade Envoy to Morocco said on the release of the report. Previous British Council research has suggested that 74% of young Moroccans believe English will replace French as Morocco’s primary foreign language in the next five years.

“The UK is underrepresented in Morocco,” Murrison added.

While the number of Moroccan students enrolled in UK universities has more than doubled from 2012-13 to 2019-20, it started at quite a low point, rising from 425 to 955, he said. Morocco is the second largest sender of international HE students on the continent of Africa, behind only Nigeria, the report noted – around half heading to France. 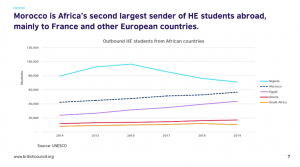 The report also lays out the higher education landscape in the North African country, which is also a destination for international students – currently Moroccan universities host some 20,000 students from Sub Saharan Africa.

However, another barrier for TNE is the affordability of UK education, the paper said. With upper secondary level qualifications, Moroccan students are entitled to places at public universities in Morocco which offer free tuition.

“The extent of the prospective TNE market is constrained by the dominance of the public HE sector, where tuition is free.,” John Mcnamara, Global Research Manager at the British Council wrote in The PIE.

“Prospective demand for an individual UK TNE entrant is more likely hundreds rather than thousands of students.”

“Fundamental changes are underway within the HE system to meet the demands of newly emerging industries and to support Morocco’s growing reputation as a gateway between Europe and Africa.”

TNE could have a “big part” to play in Morocco’s future development, the report added, and the country’s ministry of Higher Education appears willing to address the absence of a supporting regulatory framework.

Director of Higher Education and Pedagogical Development at the Ministry of Education in Morocco, Mohamed Tahiri, said the country is looking to address the barriers to UK institutions to work in Morocco.

Under current arrangements providers would have to set up an entirely new private institution, which would need to operate for three years before gaining recognition from the Moroccan government, thereby meaning diplomas would be recognised, he said.

“We are well aware that this restricts the possibilities that we are having in terms of developing TNE, which is a very important delivery in [our] internationalisation process… It is to be able for foreign universities and foreign institutions to come to Morocco to deliver programs for the benefit of Moroccans and for the benefit of international students that come to study in Morocco.”

The country is going the direction of allowing these institutions to deliver non-Moroccan qualifications and those being recognised, he added.

“TNE is as a branch campus or as a joint venture with a local institution, whether it is private or public,” he added.

“Probably for a lot of institutions that are maybe new to TNE or are maybe a little bit cautious, then not having the regulation in place is a bit too much of a risk to take,” Aisling Conboy, International Higher Education specialist at UK Department for International Trade said.

“Without a regulatory framework it can make it very hard to convince universities to actually do these ventures.”