report names HEIs most at risk from drop in international students 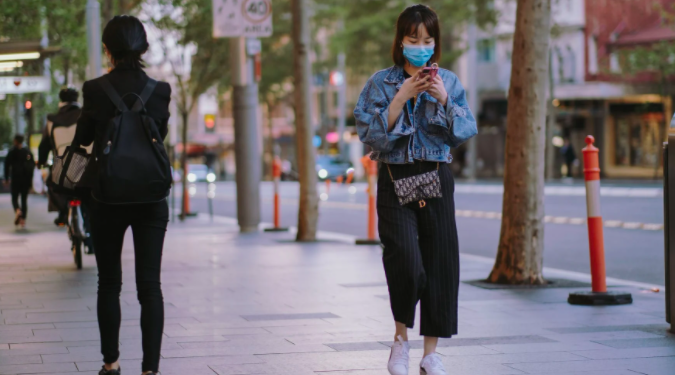 “Instead of reducing the rate of spending growth, many of them chose to ramp up recruitment”

“We all know the basics of the story,” said HESA’s president Alex Usher in a blog post that accompanies the release of the report.

“In the aftermath of the 2008 financial crisis, Canadian governments stopped increasing their spending on postsecondary education, but universities and colleges didn’t stop wanting more money.

“Instead of reducing the rate of spending growth, many of them chose to ramp up the recruitment of high fee-paying international students.”

According to the report, the number of international students at the postsecondary level in Canada has risen dramatically from just under 40,000 in the late 1990s to over 340,000 in 2018-19.

In 2018-19, international students made up 15.7% of all university enrolments and 16% of all college enrolments.

“The point here is that yes, many institutions are highly reliant on international students. But many institutions were also socking away money in the months before Covid-19, which means they might be well-placed to survive a temporary financial hit.

The report goes on to analyse which institutions are most at risk, looking at data for both universities and colleges. For universities, this data is more complete, with an extra year of international student figures available for most institutions.

It states that there are a number of institutions already operating in the red despite having international student enrolment of 20% or higher. 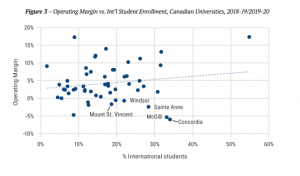 Concordia (QC), McGill, Sainte-Anne, Windsor and Mount Saint Vincent, are all highlighted by the report as being most at risk.

“Of these, McGill’s prestige means it is least likely to see a big fall in international student numbers, but at Sainte-Anne, Mount St. Vincent and Windsor in particular, the trifecta of lower prestige, weak finances and high dependence on international students means the next few months may be a time of high anxiety,” the report explains.

The public data available for colleges data on international student enrolment is far more limited and so the report only considers the question of colleges in Ontario.

According to the report, this is still useful “since no part of the Canadian post-secondary sector is as dependent on international students as Ontario colleges”.

In a graph, the authors of the report position each Ontario college with respect to both its operating margin (excess of revenues over expenditures) and the percentage of its student body which is comprised of international students. 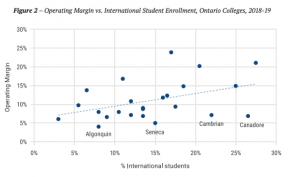 However, the data also shows that there are a number of institutions – in particular Canadore, Cambrian and Seneca, which have relatively high levels of international student enrolment, but which – in 2018-19 at least – also have relatively low levels of operating margins.

“These, therefore are the three institutions one might obviously expect to be most at risk from a loss of international students,” the report said.

A spokesperson for Concordia told The PIE News that the university eliminated its deficit in 2018-19, one year earlier than anticipated, and presented a balanced budget for 2019-20.

“The ongoing pandemic certainly raises financial concerns, as it does with all institutions,” they said.

“Right now, the trends in overall enrolment indicate similar numbers to fall 2019 but there are of course uncertainties related to costs during the pandemic and loss in revenue, particularly from non-thesis master international students as well as from income generated by hosting events and other activities that cannot take place at this time.

“We remain committed to taking actions and articulating a budget framework that best ensures our long-term financial sustainability,” they added.

A spokesperson from Mount Saint Vincent University told The PIE that although HESA should be commended for undertaking such an important and grand research project, it’s difficult to fully understand the context in which institutions are operating.

“MSVU is not operating in the red, rather the University is in strong financial shape,” the spokesperson said.

“Overall, our enrolments have remained quite strong in spite of the pandemic,” they added.