Scientists Identify the Missing Ingredient for Climate Action: Political Will 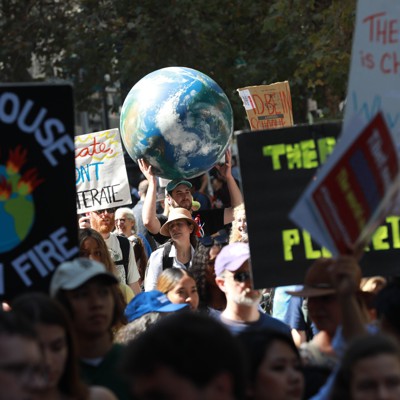 When the world’s scientific community caught wind of a novel coronavirus circulating in Wuhan, China in 2020, it sprang into action. In the span of just 12 months, researchers came up with an effective inoculation against COVID-19, beating the previous record for fastest vaccine development and deployment by three years. But experts quickly ran headfirst into a crucial problem: human behavior.

Despite reassurances from the Centers for Disease Control and Prevention, vaccine disinformation spread. Influencers such as Fox News pundits, right-wing podcasters, and anti-vax parent groups slowed the response to the pandemic. At the end of last year, 15 percent of the American population remained unvaccinated.

A similar story is playing out, albeit on a much longer time scale, with humanity’s response to the climate crisis. This week, the Intergovernmental Panel on Climate Change, or IPCC, released a report that emphasized that the barriers to accomplishing progress on climate change are largely political, not scientific.

The report, dedicated to analyzing the solutions to climate change, found that, thanks to decades of work by researchers, the world has the science, the technologies, and much of the engineering prowess needed to scale down emissions and ensure a livable planet. The missing ingredient is the political will to make those adjustments. Actions taken by a powerful minority — led by lawmakers and lobbyists for the fossil fuel industry — have prevented the world from confronting this existential threat. Now, scientists warn that the window to take effective action is rapidly closing.

“For some time, there was this assumption among many in the science community that, if only decision-makers had the right information and the public had the right information, then of course everyone would work to do what is necessary to mitigate the climate threat,” Matto Mildenberger, an assistant professor of political science at the University of California, Santa Barbara, told Grist. “But that’s not how we work.”

For the first time in IPCC history, the report includes a chapter on the social science barriers to solving the climate threat. Chapter 5 of the report, titled “Demand, Services and Social Aspects of Mitigation,” makes an effort to parse the conditions under which humans will take action to slow the climate crisis. The intergovernmental panel has included social science in its global assessments before, but this is the first report that has dedicated an entire chapter to understanding and analyzing human behavior. “I think in some ways, this chapter is sort of the IPCC catching up with an understanding that many of our political leaders already have that this is a challenging political issue,” Mildenberger said.

The chapter shows that lifestyle sector changes, when adopted en masse, have significant power to reduce greenhouse gas emissions. Taking fewer flights and more public transportation, switching to plant-based diets, and living in more energy-efficient buildings, among other strategies, could reduce greenhouse gas emissions across all economic sectors between 40 and 70 percent by 2050.

So what’s standing in the way of more people making those lifestyle decisions? In short, it’s policy.

“Individuals can’t just up and make a different decision, necessarily, to emit fewer greenhouse gas emissions,” Sarah Burch, an associate professor at the University of Waterloo, Canada and a coauthor of the IPCC report, told Grist. In order to make choices that result in fewer emissions, people need policymakers to shift the status quo. They need public transit options that allow them to easily leave their cars at home or ditch them altogether, access to affordable housing stock that runs efficiently on clean energy, and the ability to buy fresh vegetables and other plant-based foods.

Those policies are entirely feasible, at least in theory. In the United States, lawmakers in several states have introduced (and sometimes passed) bills aimed at retrofitting existing buildings to make them more energy efficient and transitioning power grids to green energy. The IPCC report shows that those types of policies not only result in reduced greenhouse gas emissions, but can also address issues of income inequality and economic insecurity, and vice versa.

“There is high confidence in the literature that addressing inequities in income, wealth, and decent living standards not only raises overall well-being,” the report reads, “but also improves the effectiveness of climate change mitigation policies.” Passing policies that improve people’s lives can also improve the planet’s outlook.

Despite gains at the state level, the United States and many other developed countries still lack federal climate policies that reduce emissions at the scale scientists say is necessary. The report’s new emphasis on the entrenched barriers to the myriad solutions it outlines in its report signals a shift for the intergovernmental panel. The IPCC is coming to the belated realization that just laying out the science and hoping policymakers use it to take action isn’t enough to move the needle.

Granted, government apathy and delay is in no small part due to political meddling by the fossil fuel industry, which has been waging concerted disinformation campaigns against climate science and lobbying lawmakers to reject climate policy since before the first IPCC report was published in 1990. Companies have successfully claimed that ditching coal, oil, and gas isn’t economically feasible and that passing climate policy would shift a massive economic burden onto consumers.

The new social science section of the latest IPCC report asserts that the opposite is true: Failing to act on climate change will incur enormous economic costs, and passing climate policy has the potential to lift people out of poverty.

But transitioning off of oil and gas will hurt the fossil fuel industry’s bottom line. “Climate policy threatens a particular set of concentrated interests who have made a lot of money from releasing carbon pollution into the atmosphere without paying the true cost of that,” Mildenberger, who contributed to the IPCC report but was not involved in the chapter on social barriers to action, said. “We’re facing a really significant economic and political conflict between the winners and losers from climate change.”

In the U.S., the political barriers to achieving climate action have been on full display over the past six months. President Joe Biden took office in January with plans to pass a climate plan that would have begun to match the scale of the crisis. But his efforts were foiled by a member of his own party: Senator Joe Manchin of West Virginia. Manchin, who has deep ties to the fossil fuel industry, negotiated with his fellow Democrats and the Biden administration for months, and ultimately succeeded in watering down Biden’s initial climate plan, which would have slashed emissions from the power sector 82 percent by 2030. Eventually, Manchin pulled his support from the weakened plan, too. Manchin’s reticence is a microcosm of what the IPCC has identified as a global issue and what pro-climate politicians, activists, and parts of the general public have long understood: politics and power are getting in the way of progress.

The full scope of chapter 5’s findings, particularly the parts about vested interests working to slow and stop climate policy, didn’t make it into the report’s Summary for Policymakers — the most important piece of the assessment that must be approved by government representatives before the report can be released to the world. An earlier draft of the report, leaked to the Guardian, included information about those vested interests (AKA, the fossil fuel industry). But it was cut in the final draft.

“The scientists clearly did their job and provided ample material on climate obstruction activities in the report,” Robert Brulle, an environmental sociologist at Brown University, told The Guardian. “The political process of creating the Summary for Policymakers ended up editing all of this information out.” Politics is still getting in the way of climate science, even in a report that discusses the ways politics are getting in the way of climate science.

Mildenberger said the fact that the sharper conclusions in chapter 5 didn’t make it into the Summary for Policymakers means that the chapter’s full insights weren’t fully elevated to the forefront of the messaging around this latest IPCC report. He still sees chapter 5 as an important downpayment on a more thorough understanding of how to get decision-makers to stand up to the fossil fuel industry and pass climate policy. But in his view, the Summary for Policymakers and the larger report leaves a lot of important questions unanswered.

“How do we disrupt the political power of the fossil fuel industry? How do we help depolarize an issue like climate change that has become politicized?” he asked. “We don’t have clear cut answers on how to deal with some of these thorny political issues.”