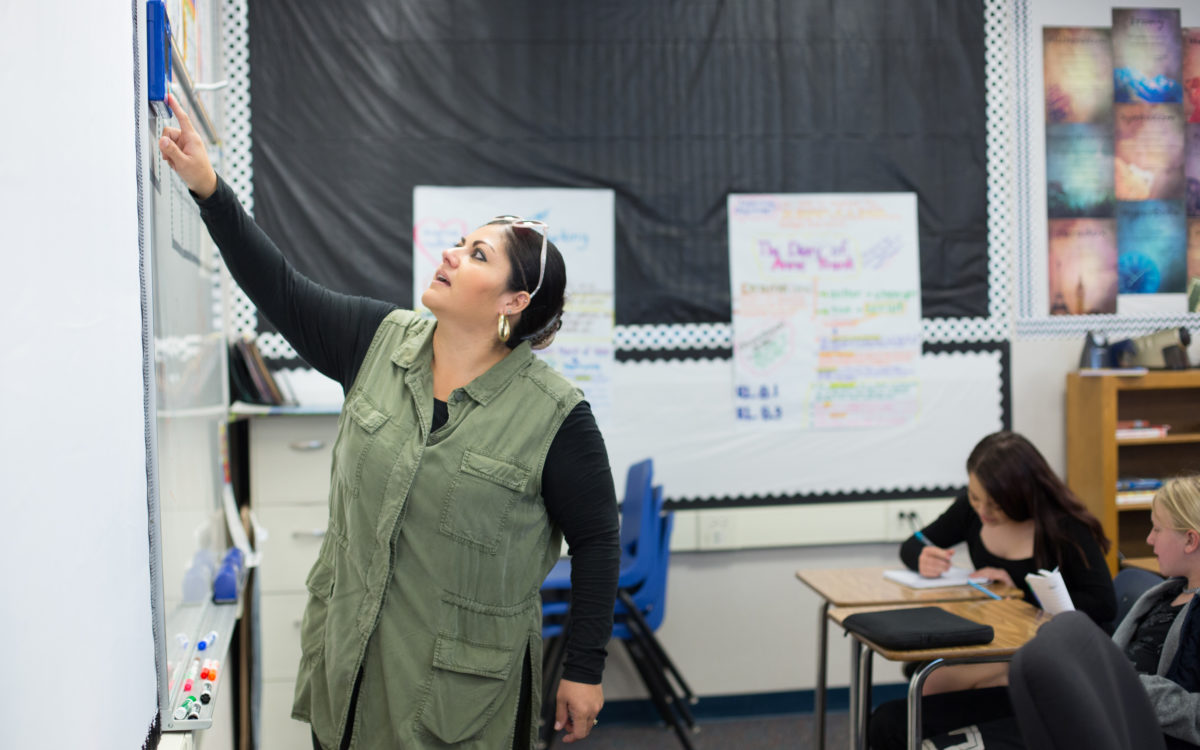 Carmen Diaz, a 7th- and 8th-grade teacher in Alpaugh, uses class time to do computer-based work with students. 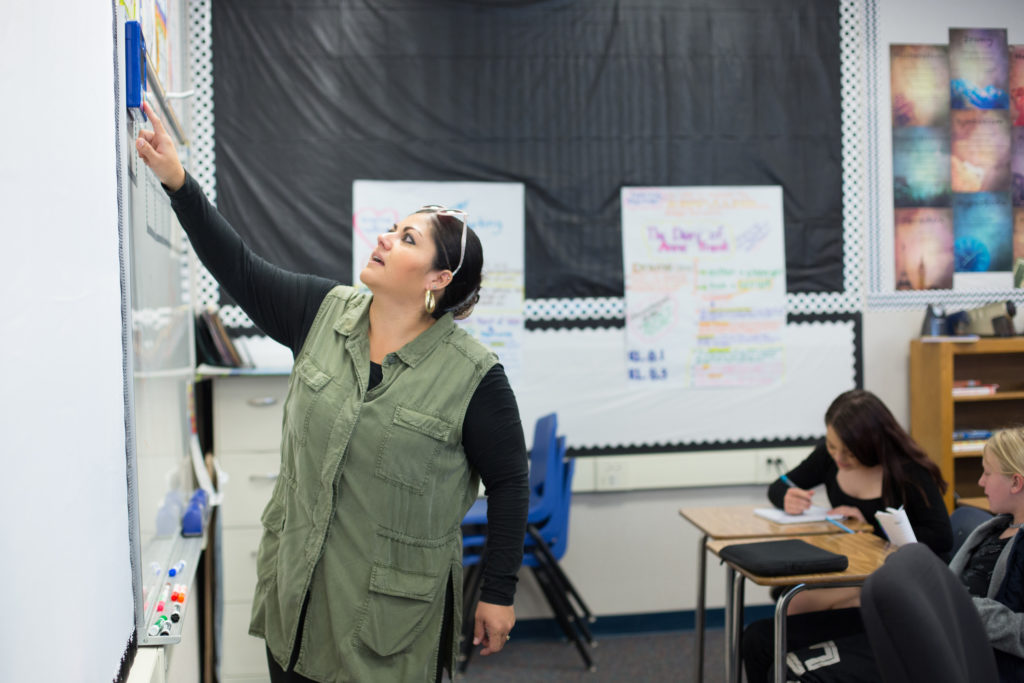 Carmen Diaz, a 7th- and 8th-grade teacher in Alpaugh, uses class time to do computer-based work with students.

Legislative leaders agreed this week that giving schools billions of dollars more in unrestricted funding  would be their top priority in negotiations with Gov. Gavin Newsom over next year’s bountiful state budget.

On Thursday, Senate President pro Tem Toni Atkins, D-San Diego, released a spending plan for 2022-23 that assumes schools and community colleges will have an extraordinary $24 billion more in one-time and ongoing funding than Gov. Newsom forecast in his budget in January.

The Senate’s Putting Wealth to Work plan would direct $5 billion of that, growing to $10 billion by 2024-25, for permanent increases in base TK-12 funding through the Local Control Funding Formula, the primary source of general spending for school districts, charter schools and county offices of education. The Senate plan would also begin to cover the full costs of transporting all students to school. The state’s small contribution to school transportation has been frozen at $500 million under the funding formula.

Assembly leaders meanwhile moved a bill forward that would add more than $11 billion annually to the funding formula starting in 2022-23. Current funding for the formula is $66.7 billion. The additional money would more than double the increase in base funding that Gov. Gavin Newsom proposed in his January budget.

Assembly Bill 1948 bill would achieve that, in part, by significantly broadening the eligibility of low-income students to receive additional money for their education needs; this would mark a major change to the 9-year-old funding formula that former Gov. Jerry Brown shepherded to adoption in 2013.

Those talks will intensify after Newsom releases a revised budget, with updated revenue forecasts, by May 15. Assembly leaders also assume there will be billions more for schools through Proposition 98, the formula that determines the portion of the state’s General Fund that must be allocated to schools and community colleges. That portion will be 38%.

Funding for schools has increased steadily each year for the past decade and, despite a short pandemic recession, soared during the past two years as a result of revenue from income and capital gains taxes on the wealthiest Californians. But much of the increase was a one-time infusion of federal and state Covid aid and in one-time Prop. 98 funding spread over multiple years for new programs, targeted for low-income schools. This includes $3 billion to create community schools and $4.5 billion for an extended day and longer year.

How much local control?

As the name “local control” indicates, Brown promised in selling the formula that districts would be able to use base funding at their discretion. But in a departure, last year Newsom and the Legislature permanently increased the portion of the formula that funds the highest-need districts by $1 billion on the condition that they use the money for extended learning time.

Organizations representing school boards and administrators have expressed worry that there will be a return to restricted or “categorical” funding, and they have complained that the base funding has annually received only a cost-of-living increase. The revised COLA, announced Thursday, would be 6.6% in 2022-23, the highest it’s been in nearly 40 years. But districts have complained that increases for inflation are not enough to cover actual cost increases.

COLA would be included in the $11 billion additional funding that Ting and the co-authors are proposing.

“Every district needs money across the board – whether suburban, urban or rural – and will all get a 15% increase,” Ting said in introducing the bill Wednesday in a hearing of the Assembly Education Committee, where it drew bipartisan support and passed without dissent. “The funding formula was put in place my first year in the Legislature. It’s time that we reform it and be willing to take a hard look it, especially with the significant increases in our state budget.”

“This is a big, big, deal, a huge bill,” said O’Donnell. “The money is there,” he said, referring to projections of record revenue. “It needs to go to the classroom; it’s not about what people want but what California students need.”

Despite supporting the bill in principle, major education groups, including the Association for California School Administrators and the California School Boards Association, have yet to endorse the bill.  That’s because significant amendments were added the night before the hearing and they and others want to see data runs showing the impact of the changes on individual districts.

The biggest change would be how to calculate low-income students.

Under the formula, every charter and school district receive an additional 20 percent beyond base funding for every English learner, foster youth and low-income student who attend. Districts in which these students make up more than 55% of enrollment receive even more funding.

Until now, California has used the number of students who sign up for free and reduced school meals and whose families have enlisted in other federal poverty programs to determine a district’s low-income students. But that measure is no longer accurate; districts are having difficulty persuading parents to verify their family income, now that California is offering free lunches and breakfasts for all students.

Other states have been exploring an alternative to free and reduced meals eligibility, which experts  view as a convenient but imprecise measure of poverty. Ting and O’Donnell propose using the standard for receiving state financial aid for college through Cal Grants as the new basis for low-income eligibility. That standard is income of up to 250% of the federal standard for poverty – $66,000 this year for a family of four ­– compared with 185% of poverty as eligibility for free and reduced meals.

The impact would be to add hundreds of thousands of additional students qualifying for supplemental funding under the funding formula, at an estimated additional cost of about $2 billion per year; the percentage of students eligible for the money would rise from 63% to 70% of students statewide, based on Census data, according to estimates from Ting’s office.

Student advocacy groups that favor more funding for districts with the most concentrated poverty say this approach is a potential concern.

“We’re not ready to jump on any bill yet. We want to see some increase to the base, but two and a half times federal poverty level seems high and could dilute the impact on funding equity,” said John Affeldt, managing attorney for the nonprofit law firm Public Advocates, and a spokesperson for the LCFF Equity Coalition, representing a dozen student advocacy and civil rights organizations.

Further analysis could show that most of the additional students whose families earn up to 250% of poverty would generate more revenue for middle class districts, not urban districts with the most low-income students.

AB 1948 would also formally add homeless students as a category of students for additional funding under the formula and require districts to commit resources for them.

The bill sides with the governor on a related contentious issue: how to fund schools post-pandemic, amid projections of a statewide enrollment decline over the next decade. Newsom is proposing a rolling three-year average of funding, measured by daily student attendance. Doing so would cushion the impact of yearly drops in enrollment. Sen. Anthony Portantino, D- La Cañada Flintridge, is proposing to switch to funding by total enrollment, not attendance, which would provide districts with an estimated additional $3 billion more in annual revenue.

Left unresolved is how to fund schools in 2022-23. Attendance this year, the basis for next year’s budget, is expected to be sharply lower because of the omicron wave and continued high chronic absenteeism, creating a budget cut of 8% to 10% or more for many districts.

“That question is glaringly absent in the bill,” said Kevin Gordon, president of Capitol Advisors Group, an education consulting firm. “But it is a positive development that the Legislature is staking out its priority on base versus restricted funding ahead of the May revision.”