some students falling through cracks in support schemes

With extensive job losses in the casual labour market and families’ income in home countries being hijacked by Covid, international students expecting to support themselves are now being forced to rely on food banks and some are now living in crowded accommodation.

Some students are not seeking support through structured means such as via university services: this may be because they are concerned that their immigration status is under threat because tuition fees are outstanding.

Others, as The PIE has discovered, are being denied access to hardship funds because they cannot provide evidence of their need.

At least one university is also rejecting applications for financial support if students have outstanding unpaid tuition fees, based on freedom of information requests returned.

Speaking to The PIE, Vivienne Stern, executive director of UUKi, said that visa status should not preclude access to university hardship funds – the UK government recently increased this fund by £50m.

She also explained that UUKi has ascertained that some of the immediate assistance universities are offering – such as food vouchers to use at local food banks – is being made available without a requirement to demonstrate financial need.

UUKi has been working with the food bank in question, Newham Community Project, to try and ensure international students can access support services.

“Most universities we contacted were not aware that students were currently using the Newham foodbank,” explained Stern, emphasising that the universities were sometimes located hundreds of miles away.

“There are students who aren’t coming forward for a variety of reasons. And those are probably quite complex and various.”

Stern confirmed that students seeking help would not see an impact on their visa status.

“We have been asking ourselves the question, is there something more that we should be saying to international students about the risk to them in visa terms of coming forward for help?,” she shared.

“Our view is that no student should be afraid to approach the university for financial support because they’re worried that their visa would be curtailed. That’s not the way it works.

“It’s not that if you turn up and say, ‘I haven’t got enough money to do the shopping, I can’t eat this week’, that the university is going to respond by reporting you to UKVI. That’s not going to happen.”

Stern confirmed that universities would seek to work with students if it became clear they would not be able to pay the remainder of their tuition fees by the end of the academic year.

Under those circumstances, students would be asked to consider a range of options, she said, including suspending studies and picking them up again as a future date.

“Or in the current circumstances, students are able to continue the studies fully online from their home countries. So there will be options available that don’t mean that you have to abandon your degree.”

At the Newham Community Project, manager Elyas Ismail told The PIE that he was aware of students living four-to-six per room in four bedroom properties housing 20 students – some of whom were working as delivery drivers in the low paid gig economy.

He said many students had headed to this area, home to a large south Asian population, hoping to find work or where irregular occupancy of house-shares might go unreported.

The food bank in East London is spending £3,000-4,000 a week on food and is now at capacity. Read more in our Analysis investigation. 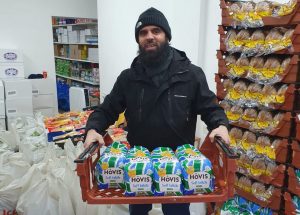 Elyas Ismail sorts through food to be given to students. Photo: Newham Community Project