At the end of March 2020 when self-isolation measures were introduced, SI and SI IELTS Test Centre began running webinars twice per day to accommodate various time zones across Russia, with as many as 300 attendees at some events.

Deputy director at SI, Igor Mishurov, explained than an “educational summit” was held twice, which involved universities and colleges talking about what actions they take for their students’ safety during the pandemic and what the autumn 2020 intake is going to look like.

The 24-hour webinar marathon was held on June 6-7 and featured more than 30 educational institutions from 17 countries. 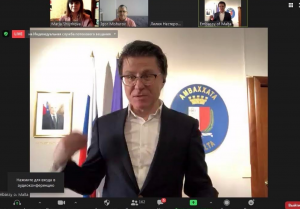 Representatives from the Canadian and Maltese Embassies, and Australia’s Austrade, gave speeches during the event and 12 students and parents shared stories of their own study abroad experiences.

Additionally, with the “Gift of Life” charity foundation, SI and SI IELTS Test Centre ran a fundraiser for children with serious diseases during the marathon, explained Mishurov.

“We tried a new promotion strategy and it turned out to be a huge success,” he said.

Mishurov explained that the event attracted 1,900 attendees live on Zoom, 5,700 though VK.com and a further 11,750 via Facebook.

“The 24-hour marathon finished on June 7, which happens to be Students International’s birthday,” he added.

Our company has been working in the educational industry since 1992, and even though we have reached quite a considerable age being an educational agency (which is rare), we continue to seek the best ways to promote our partner educational institutions and to recruit students.”