A survey of further education, sixth form, tertiary and specialist colleges in UK – carried out by Association of Colleges – found a trend of international student enrolments “steadily and worryingly” declining.

The International Survey, garnering responses from around a fifth of the UK’s FE providers, revealed that no provider had issued more than 50 Confirmation of Acceptance for Studies letters in 2019/20 to international students who would need the document for their student visa applications.

The number of providers that had Tier 4 sponsor licences fell from 82% in the previous year to 71% in the latest survey.

The survey also found that 21% of respondents thought some of their programs that attract EU students would no longer be possible under the new immigration system, while 52% indicated the end of freedom of movement would result in a loss of income.

Programs that will no longer be viable for European students include A level syllabus high school years at an English colleges, without taking the exams, and part-time masters-level study.

Some 73% of respondents indicated they expected fewer EU students under the post-Brexit immigration scheme than before freedom of movement ended.

With the additional impact of Covid-19, respondents were on average 19% down on their forecast international income.

“With very little data available about college international work, this report provides an indication not only of the range of FE international activity, but of its ambitions for and barriers to growth,” said AoC’s international director, Emma Meredith.

“It is time to reverse the decade-long decline in FE international student numbers and to properly support the contribution that colleges could make to UK exports.”

A fall in international numbers should be a concern as colleges provide a pipeline to higher education, AoC said. Respondents pointed out that more than half of their overseas students progressed to higher education after completing their studies at colleges.

“Although this target is largely expected to be delivered by the university sector, colleges provide a pathway to university and further UK study,” the AoC said. Earlier this week, HESA stats showed that there were 556,625 international students in UK higher education in 2019/20.

According to Home Office figures, FE applications for around 5% of the total sponsored UK study visa applications, the report said.

“The impact of Covid-19 will be felt across at least two if not three or more academic years, assuming international student recruitment ever returns to its pre-Covid model,” the report suggested.

Among recommendations included in the report are that agencies involved in promoting the UK international education sector – including government departments and the British Council – should “dedicate greater material support and focus to UK FE”.

An audit should be conducted to decipher English colleges’ export potential, it noted.

The survey identified concerns over the likelihood of visa refusals remaining a real risk for colleges when issuing CAS, which drives down student numbers.

The current visa regime makes recruitment from some countries with demand for vocational education difficult, it said.

The most common form of international activity at UK colleges was Erasmus+ for the first time.

Since the first survey, student recruitment had not moved from the top activity spot, the survey noted, but it is “not surprising” that Erasmus+ participation topped the chart this year.

“Ongoing uncertainty” around participation beyond 2020 gave the Erasmus+ “heightened publicity and campaigning”, the report noted.  “Colleges had taken steps to ensure their Erasmus+ participation given future uncertainty.”

The recently announced Turing scheme must match the benefits that the Erasmus+ scheme provides to colleges, the report stated.

“Whilst we recognise that Turing may not offer the full range of opportunities afforded by Erasmus+, AoC will work with government departments to support the implementation of the Turing scheme, ensuring that college students can participate fully.”

China – with its “increasing commitment to vocational education, vast geography and a growing middle class” – was unsurprisingly the most cited country as important for colleges, while Italy ranked second for the second year running. China was listed almost three times more than any other country.

Japan took third place and India dropped to ninth. Switzerland and the USA were new entries which “may reflect partnership opportunities previously advertised to colleges that have now been taken up”, the report said. 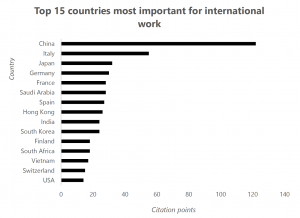 Additionally, China, India, Europe, followed by Japan and the Middle East were the top five overseas markets colleges would like to develop.