In 2020, the Netherlands, Denmark and Finland were ranked first, second and third, respectively, for countries most proficient in English, continuing a trend of Northern European countries placing highest in the index that has been evident for years.

Overall, 26 countries significantly improved their scores by more than 20 points and seven countries experienced “significant declines” globally, according to compilers of the report.

Those improving their scores include Turkey, Georgia, Russia, Sri Lanka, Mongolia, Panama and Honduras, among others.

At the other end of the table Tajikistan, Iraq, Oman, Saudi Arabia were ranked bottom four for English proficiency, however the report noted that the average across the Middle East rose significantly compared to last year’s report.

“Government efforts to improve English proficiency in the Middle East are delivering results,” the report noted. “The region may be poised for a change.”

With Tajikistan ranked bottom overall with 381 points, Asia “spans the spectrum” of proficiency as almost half the countries surveyed registered drops in scores.

“As was the case last year, Asia is the region with the widest range of proficiency levels—an unsurprising finding, given its size,” the EF report explained. “China has consolidated its progress over the past decade.”

Based on results from 2.2 million EF Standard English Tests, the index also found that 12 of the 19 Latin American countries surveyed improved their proficiency scores between 2018 and 2019, which EF explained was thanks to heavy investment in teacher training in recent years.

In both Europe and Africa, scores were polarised. While scores in France have improved for the past three years, Spain and Italy still lag behind the rest of the continent, with Azerbaijan, Turkey and Russia still further towards the bottom of the ranking in Europe.

In Africa, proficiency in Tunisia, Angola and Algeria increased. Despite the gap between higher and lower proficiency countries being wide, the report also called for local school systems to stop prioritising teaching in English or French ahead of local languages. 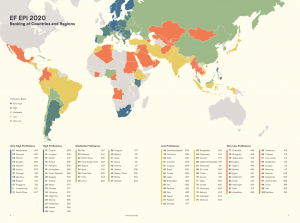 Overall, the index found that adults aged 26-30 have the strongest English skills, followed by those aged 21-25.

“This finding reflects the growing prominence of English instruction in university education around the world,” the report noted.

“It also suggests that on-the-job English practice and often some formal training are building English proficiency early in adults’ careers.”

Among the other findings of the report were the correlation between English and various measures of investment in R&D, countries with high English proficiency being “fairer and more open”, and the proficiency scores of managers surpassing those of their executive and staff colleagues.

“Building English proficiency across all seniority levels would allow companies to share information more quickly across their organisations, and to access more diverse pools of talent,” the report noted.

Additionally, it found “consistent correlations between English proficiency and measures of technology adoption”, including access to secure servers, broadband and English-language media.

“What people are less sure of is how to improve English proficiency in their organisations, in their countries, in their schools, and for themselves.”

While there is “no single solution that will work in every situation”, the report recommended that companies should set realistic goals, at the same time as building cultures of internationalism and mobility and facilitating frequent contact between teams in different countries in order to benefit from the innovation and employee skill growth that English proficiency enables.

In addition to investment in teacher training – as shown in Latin America – the report calls for governments to ensure education aids communicative English skills, provide lifelong learning programs and English language instruction in job centres, and allow TV shows and movies to be shown in their original language with subtitles rather than dubbing.

However, it emphasised that children should be taught to read and write in their native language first.

Teachers must also be offered straightforward paths to improve their own English, and be provided with forums to share best practices and get advice about teaching the language effectively, the report added.