The visit took place on the same day that the minister announced that new international student and child student routes would open on October 5 as part of the government’s commitment to introduce a new points-based immigration system.

During the roundtable, the Study Group team shared with the minister views on how to make British education more competitive internationally and discussed measures to help reach the ambitious educational export target of £35 billion by 2030.

Study Group also committed to continuing to work closely with the government on the International Education Strategy and to share insights drawn from its network in international education markets.

Speaking of the newly announced student route, the government explained that international students play a key part in the government’s agenda to unleash the UK’s potential now that it has left the EU. 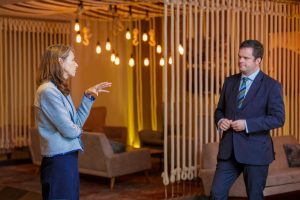 The meeting with Study Group reflected the company’s longstanding engagement with the UK government to support welcoming policies for students as part of the country’s IES.

Welcoming the opportunity to talk directly to the minister and his team, Study Group CEO, Emma Lancaster, thanked Foster and Universities minister Michelle Donelan for their efforts to support for international students through policy mitigation in the face of Covid-19.

“We also thanked the minister for his commitment to the very welcome new International Education Strategy and in particular recent changes to reintroduce the opportunity for post-study work visas which puts the UK in line with other countries seeking to attract international students,” Lancaster added.

“This is an important change for students seeking an opportunity to develop their careers and to mitigate the cost of study in the UK, as well as bringing vital skills and tax revenue to the UK economy, and we are keen to do our part to communicate the latest developments to talented potential students across the world.”

During the visit, Foster also met international students and staff from the University of Cardiff.

Study Group has been chosen by the university to deliver its pathway programs for international students and the first cohort will begin their studies via the Cardiff International Study Centre this autumn.