Compiled by Navitas in September, the research found that agent responses indicated that the way governments have handled the coronavirus is becoming less of a choice factor as the pandemic evolves.

“New Zealand, Canada and Australia are all considered more safe and stable, but less open and welcoming”

New Zealand, Canada and Australia are all considered more ‘safe and stable’ than other anglophone study destinations, such as the UK and US. However, the three countries are also viewed as “less open and welcoming” than the UK – sentiment which may be more pertinent for agents, the survey concluded.

Since the last survey two months ago, the proportion of agents agreeing that the reputation of a country as ‘safe and stable’ and ‘open and welcoming’ has improved, Navitas noted.

“It would appear that the way governments have handled the coronavirus is becoming less of a choice factor as the pandemic evolves,” it said. 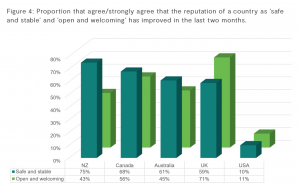 Despite the UK’s “relatively” weak score on ‘safe and stable’ (59% agreeing), it ranks the highest on ‘open and welcoming’ (71% agreeing), its reputation ranked highest among agents, the education provider suggested.

New Zealand is the “prime example” of a destination that ranked highly on ‘safe and stable’, with 75% of agents agreeing, but it ranked four of five regarding ‘open and welcoming’.

“It is apparent that these two dimensions do not go hand in hand,” the survey noted.

“New Zealand, Canada and Australia are all considered more safe and stable, but less open and welcoming.

“For agents, a country’s reputation as being ‘open and welcoming’ is currently more important than its reputation as being ‘safe and stable’ when it comes to its attractiveness as a study destination”, the report’s author Jon Chew, head of strategic insights and analytics at Navitas, explained.

“On the whole, agents are less enthusiastic about how countries have handled the coronavirus pandemic over the last two months,” the report said.

“One of the most significant findings of the September survey is the shift in perceptions of the UK’s handling of the Covid-19 crisis,” it continued.

“Opinions on the UK’s handling have improved substantially since the first round of research in May 2020.”

In contrast New Zealand, Australia and Canada each saw a decline of between 15 and 20 percentage points in response to the question about the government’s handling of the coronavirus, representing a shift in the perceptions of agents around those destinations.

Sentiment for the US is the lowest in anglophone destinations with only around one in 10 agents agreeing that its reputation for being a ‘safe and stable’ (10%) and ‘open and welcoming’ (11%) country improving over the last two months, the survey showed.

“Agents’ perspectives on the USA continue to deteriorate with 63% of agents disagreeing that the USA has become more safe and stable for international students in the last two months,” the report noted.

A possible explanation for a change in agents’ responses include differences in performance between countries moderating, “especially as each country faces the challenges of sporadic outbreaks and second or third waves”.

“Agents’ perspectives on the USA continue to deteriorate”

Openness and ability may be becoming an over-riding short term concern, as pre-Covid fundamentals that drive destination attractiveness start to reassert and influence destination decisions, could be additional reasons for government pandemic handling becoming less of a choice factor, Navitas maintained.

“Strong performers have become less distinctive as more and more countries find mixed results (be it health, social or political) in attempts to get the virus under control,” it also suggested.