Universities across the US and Europe could on average see falls of nearly 7% and 5.2%, respectively.

The dependence on fee income – including from international students – is particularly notable in four countries, U-Multirank highlighted.

Previous estimates have suggested that declines in international student enrolments at UK universities could lead to losses of between £1.4 billion and £4.3bn.

Additionally, research universities that attract larger numbers of international students may be financially hurt more by the crisis than teaching-focused institutions, it found.

“The Covid-19 crisis appears to have a dramatic effect on the mobility patterns of international fee-paying students,” co-project leader of U-Multirank Frans van Vught said.

“They now hesitate to apply for enrollment in universities in other countries, postpone their decisions to do so, or chose an institution ‘closer to home’.

“As a result, particularly in countries where there are government and institutional policies to recruit heavily from the international student market like in Australia and the UK, the universities are confronted with a strong negative impact,” van Vught added.

“They are often strongly subsidised from the public purse and less dependent of high international tuition fees, but a problem may arise when governments start decreasing their higher education funding as a consequence of budgetary constraints caused by the pandemic.” 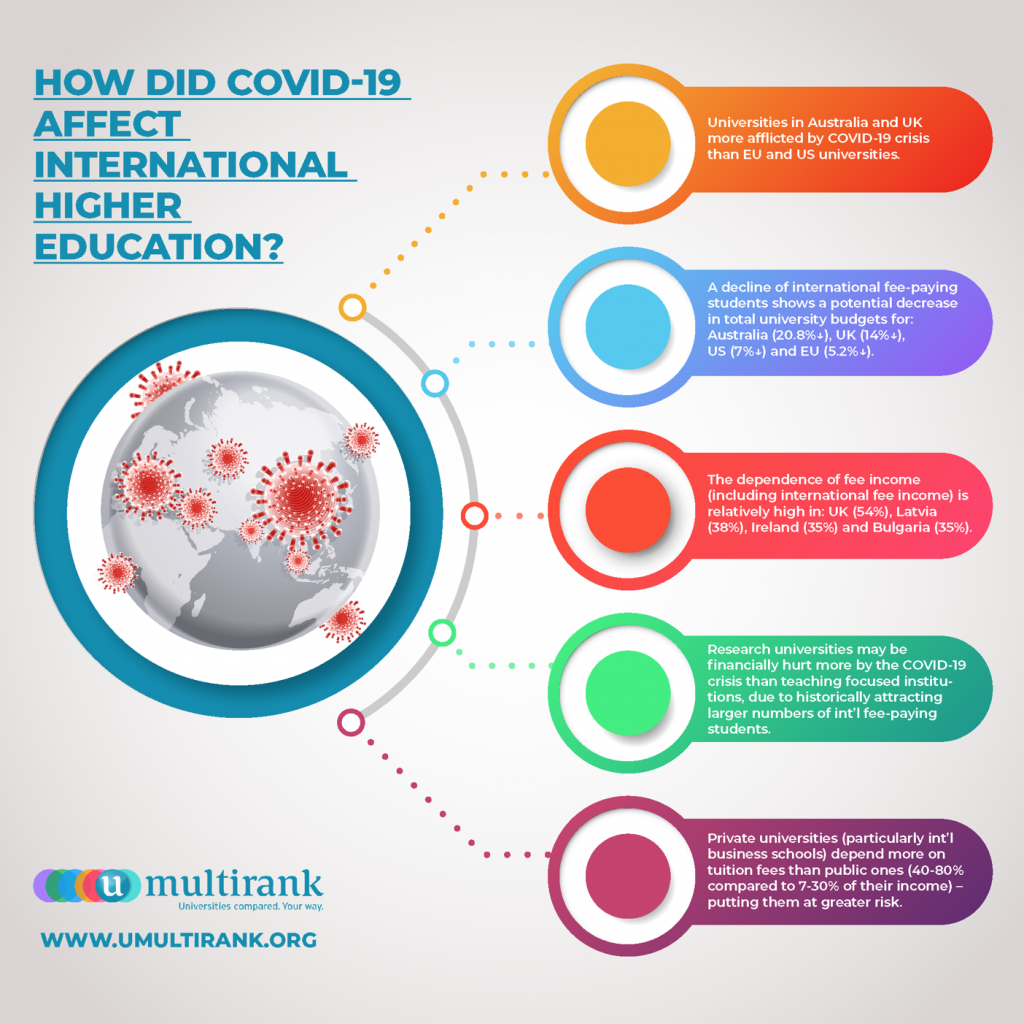 Speaking to On The Media podcast, New York University Stern School of Business professor Scott Galloway suggested elite institutions in the US are “not worried about a short-term hit to their balance sheet” due to the resources they have.

“There’s the guys at the top who have a lot of resources and can afford to stay closed and be remote. They have amazing brands,” he said.

Institutions with extensive waiting lists such as Princeton, Harvard and Stanford “are fine, they are bulletproof”, he continued.

In Australia, top universities have previously been warned to scale back expenditure due to anticipated financial loss of international student revenue.

At “the other side of the spectrum” in the US, educators such as Cal State focus on providing certification and education at a “really good price”, Galloway continued.

“The value proposition there isn’t a leafy college football game experience,” he said, adding that its offer “largely remains intact in a period of Covid-19”.

“They have the confidence to say ‘look we are going to focus on all online learning, we’re going to shut this down for this semester and we’re going to look forward to welcoming you back in hopefully spring and January or February’.

“The ones in the middle are in a more difficult spot, that has led them down this rabbit hole of what I would call incremental bad decisions,” he said.

Institutions that have not announced they will teach fully remotely may “feel more financial pressure to stay open”, Galloway added.

That reliance puts private universities at “greater risk”, according to U-Multirank.

In the US, the international fee income from private universities is on average more than twice as high when compared to public universities.

How To Build A Computer