‘What would you do with something like that?’ Box of human heads for medical research still missing in Denver 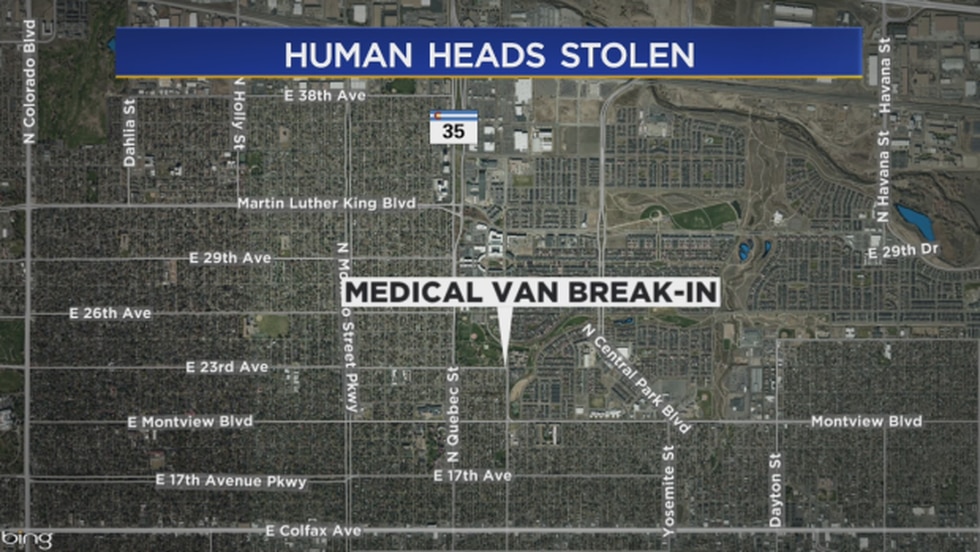 DENVER (KKTV) – A box of human heads is still somewhere out there.

The heads have been missing since the morning of March 3, when they were taken from a medical van in Denver’s Central Park neighborhood. Sister station CBS Denver reports the van was parked near 23rd and Syracuse Street when crooks broke in, stole a dolly and snatched the box.

It’s not clear if the thieves knew what they were taking or if they got a gruesome surprise later.

“It’s the type of headline you might see on ‘The Onion,’” neighbor Kevin Channell told CBS Denver. “… What would you would do with something like that if you intentionally stole it?”

The box is blue and white and has the label “exempt human specimen” on it. Anyone who sees the box is asked to call the Denver Police Department right away.

The heads were for medical research, according to police. Science Care, the company that owns the box, issued the below statement to CBS Denver:

“We were made aware of the theft immediately and we have been working closely with local Denver authorities to investigate this crime. We are doing everything we can to locate the stolen tissue and protect the community. Due to the sensitive nature of our business, and as there are several ongoing investigations, we do not have any further comment on this criminal matter.

This is an extremely rare situation. If anyone has any information on this crime, or on the whereabouts of the box or donated tissue, we urge you to please contact the Denver Police or Science Care at [email protected]. We look forward to a safe resolution of this situation.”

The Denver Police Department says those with information wishing to remain anonymous can also call Metro Crime Stoppers at 720-913-STOP.